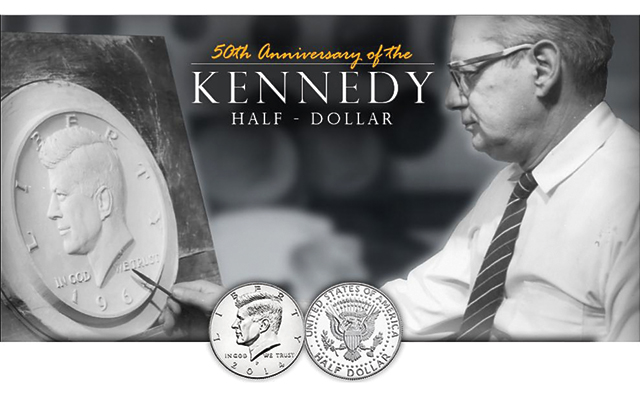 Chief U.S. Mint Engraver Gilroy Roberts is shown working on a plaster model for the obverse of the Kennedy half dollar. 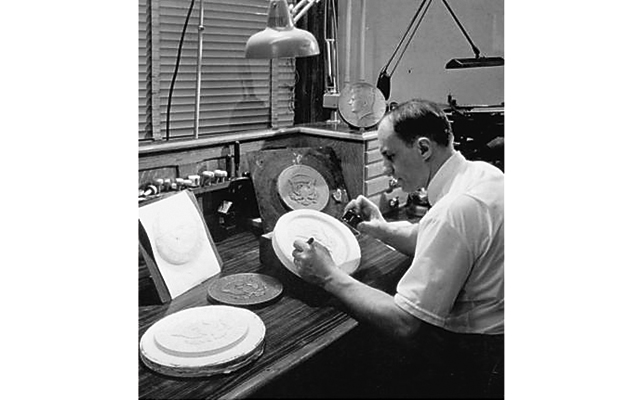 As part of the design process, Assistant Engraver Frank Gasparro, who would soon become chief engraver, sculpted different variations of the presidential eagle in plaster for the Kennedy half dollar reverse. This painstaking process relied on the dexterity of the artist with traditional hand tools.

To highlight the 50th anniversary of the Kennedy half dollar, the United States Mint has launched a multipart online retrospective chronicling the development of the coin.

According to the first installment, posted at www.usmint.gov/campaigns/?action=Kennedy, not long after President John F. Kennedy's Nov. 22, 1963, assassination, his newly installed successor as president, Lyndon Johnson, quickly submitted a bill to Congress to authorize a redesign of the half dollar.

"In the two months between enactment of the law and minting the first coins, then-United States Mint Director Eva Adams, appointed by Kennedy in October 1961, charged Chief Engraver Gilroy Roberts and his protégé, Frank Gasparro, with creating the designs for the new half dollar, according to the U.S. Mint's website.

"After the assassination, during the final days of 1963, Roberts joined Adams and former Treasury Secretary C. Douglas Dillon as Jacqueline Kennedy and Attorney General Robert F. Kennedy examined a trial strike of the design concept that had originated in connection with a presidential bronze medal series that Kennedy personally approved before he died," the website recounts.