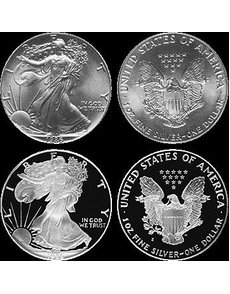 Shown are two American Eagle silver bullion coins from 1986. Both were struck at the San Francisco Mint; however, only the Proof version at bottom has an S Mint mark, located below the left branch in the eagle’s talons.

What do the parentheses around Mint marks signify in Coin World’s Coin Values section in the monthly special edition mean? For example — under the American Eagle silver bullion coin section, “1986 (S)” is listed followed by “1986-S.”

I see this style used for other listings as well. I have looked through the abbreviations key for an explanation, but have not found an explanation.

The parentheses in Coin World’s Coin Values section indicate that the coin was struck at a particular Mint, but the coin itself does not carry a Mint mark.

Coin World uses this same approach in two of its books: the annual Coin World Guide to U.S. Coins, Prices & Value Trends and the Coin World Almanac. Using this approach permits users to identify a coin’s Mint of issue even when it bears no Mint mark.

Another reason for this approach is to record mintages when a particular coin is struck at multiple Mint facilities with the same date, with all pieces lacking a Mint mark. For example, the 1965 Jefferson 5-cent coin was struck at three Mint facilities, none of which used Mint marks. The Philadelphia Mint struck 12,440,000 pieces, the Denver Mint struck 82,291,380 and the San Francisco Assay Office struck 39,040,000 pieces. The total mintage of 136,131,380 pieces is what appears in most reference works.

Shown above are the obverse and reverse of two American Eagle silver bullion coins from 1986. Both coins were struck at the San Francisco Mint that year. The top coin is the Uncirculated bullion coin, which does not have a Mint mark. The bottom coin is the Proof version, which has an S Mint mark located below the left branch in the eagle’s talons.

From 1986 through 1988, the American Eagle silver bullion coins, without a Mint mark, were produced exclusively at the San Francisco Assay Office and San Francisco Mint (the same facility).

Beginning in 2001, all American Eagle silver dollar production was moved to the West Point Mint. However, since 2011, bullion versions have again been struck at the San Francisco Mint also, to help the U.S. Mint meet the massive demand for the coins.