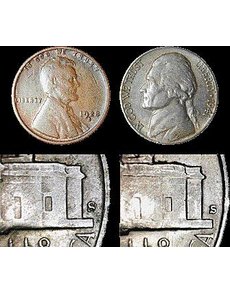 Mint marks excite me! And, since most of my previous 45 years as a roll searcher was spent living in New York and Pennsylvania, I usually found coins that had their origins at the United States Mint facility in Philadelphia.

As a result, almost every coin that I looked at had an empty space where I really wanted to see a little D (Denver) or S (San Francisco) Mint mark. Still, some coins with Mint marks did show up during my searches.

I especially enjoyed finding anything marked with the Mint mark “S,” as I got a real kick out of imagining how a particular coin had circulated the almost 3,000-mile distance from California in order to end up in a roll of coins that I was searching through in New York or Pennsylvania.

Yeah, I know, I was easily amused.

Anyway, about seven years ago, I moved to the beautiful Pacific Northwest, and in this corner of the country, I find coins with Mint marks on them all the time.

You would think that, since they are so commonly encountered here, I would be used to seeing them by now.

This month’s finds included some early Lincoln, Wheat cents and many of them had my favorite San Francisco Mint mark visible under the date.

Another fun find was discovered in a roll of Jefferson 5-cent coins. Dated 1941 and sporting an S Mint mark, this coin turned out to be a little special.

The Cherrypickers’ Guide to Rare Die Varieties, Fourth Edition — Volume One by Bill Fivaz and J.T. Stanton, edited by Mike Ellis, lists this coin as a large Mint mark variety.

As seen on page 307 of this excellent reference, two different styles of Mint mark were used in 1941 and I had apparently found the rarer of the two varieties.

I’ve included images of both Mint mark styles for comparison.

Please share your finds with me. You can go to askaboutcoins.com to send me an email.