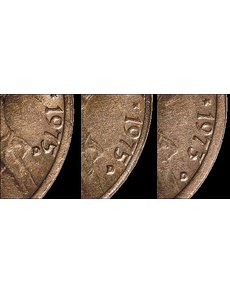 While looking through the Dec. 24, 2012, issue of Coin World, I came across “Case of the moving Mint mark” illustrated by three different Mint mark locations on some common-date Jefferson 5-cent coins, shown above.

I was particularly intrigued by the one with the D way out of normal placement and squeezed between the 5 and the back of Jefferson’s portrait. Seeking to learn more I went on the Internet and soon made contact with the provider of the pictures, Mike Diamond. I was quite excited about the “errant” Mint mark, probably more than Mike was.

I asked about the rarity of the variety, and Mike said he had two, both bought on eBay. He offered me one, and after about three seconds of consideration I bought it for $25. Not that $25 is a lot of money these days. It will not even buy room service breakfast in an upscale New York City hotel. But, in the current A Guide Book of United States Coins, a Mint State 1975-D 5-cent coin is valued at 25 cents. I paid 100 times that figure!

Should I worry? The risk is, of course, that in the hands of other Coin World readers there might be 100,001 more of them, and the variety is really common. However, I did note that the mintage of the 1975-D 5-cent coin is 410,875,300. This is more than one coin for every man, woman, and child living in the United States of America.

Another risk: an inherent danger exists in owning this coin.

As of 2007 it is a criminal offense to melt or export a cent or a 5-cent coin, punishable with a fine up to $10,000 and up to five years in prison. This means that after it arrives, I must keep my 5-cent coin away from intense heat, and if per chance I take a motor trip to Canada (about four hours away), I must be sure I do not take it with me!

As to more serious matters, I don’t know the average life of a 5-cent coin obverse die in 1975, but supposing it was a million coins, this might mean that the “errant Mint mark 1975-D” 5-cent coin (to give it a name) is about 400 times less common than the others. Mike Diamond in his email suggested that the die might have been noticed by a press operator and taken out of service. Hmmmm. What if only 10,000 were struck? Then my $25 investment is secure!

I will stay tuned, to see if more information comes to light.