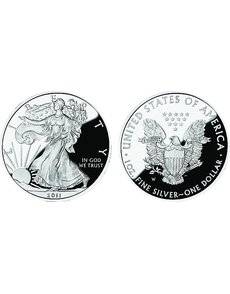 Customers could resume buying the Proof 2011-W American Eagle silver dollars Oct. 7, at a price $1 lower than when first offered June 30 and $9.50 below the price charged when sales were suspended Sept. 26, for the second time in two months, for repricing.

Two weeks after being pulled from sale by the U.S. Mint for repricing, the Proof 2011-W American Eagle silver dollar was returned to the product catalog at a price lower than when the coin was first offered in June.

Sales of the various products were suspended Sept. 26.

The Mount Hood and Gettysburg 5-ounce coins offered under the America the Beautiful Quarters Program were offered at $279.95 when sales were suspended Sept. 26 for repricing. Both of the coins were returned to sale at $229.95, $50 below their original issue price.

Also suspended for repricing Sept. 26 were the 2010-S and 2011-S Silver Proof sets and America the Beautiful Silver Quarters Proof sets, all of which were returned to sale Oct. 5 at the same price they were when sales were suspended, according to U.S. Mint spokesman Michael White Oct. 5.