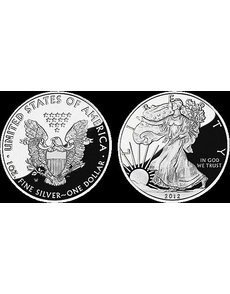 The United States Mint has lowered the retail price for the Proof 2012-W American Eagle 1-ounce .999 fine silver dollar by $5.

U.S. Mint officials announced the drop to $54.95, effective July 25, in a notice on the Federal Register (www.federalregister.gov).

The reduced price is $5 lower than the introductory price when the Mint launched sales of the coin at noon Eastern Daylight Time April 12.

Because the numismatic coin contains precious metal, its price is subject to fluctuation, with changes determined by a pricing grid based on the London PM fix for the spot price for 1 troy ounce of silver.

The pricing grid can be found online at www.usmint.gov.