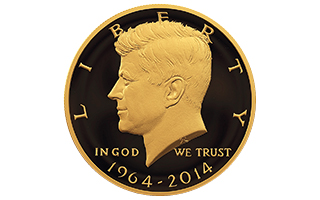 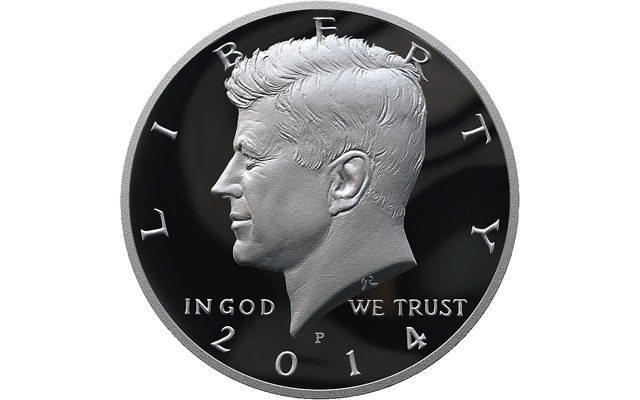 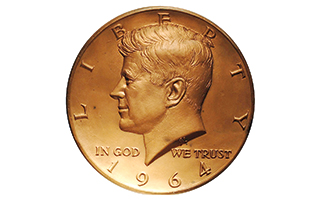 Multiple versions of the Kennedy half dollar will be produced during 2014 by the U.S. Mint on the 50th anniversary of the coin’s introduction, including three special collector versions.

Topping the list is a .9999 fine gold Proof that will be produced at the West Point Mint. The gold coins will be the same diameter, 30.6 millimeters, and thickness, as the silver and copper-nickel clad versions, but contain approximately 0.75 ounce of pure gold.

As of press time Feb. 28, U.S. Mint officials were still tweaking the exact weight specifications that will appear on the gold coin along with the precious metal fineness.

During a Feb. 25 visit to the Philadelphia Mint, Coin World was able to meet with Steve Antonucci, manager of Digital Process and Development, who detailed the development process for the 50th anniversary Kennedy half dollars. Coin World was also able to tour the research and development lab to witness production of test strikes for a copper-nickel clad version.

The U.S. Mint is already producing copper-nickel clad and .9000 fine silver versions of Proof 2014-S Kennedy half dollars at the San Francisco Mint for inclusion in various Proof set configurations. The Denver Mint and Philadelphia Mint are striking Uncirculated Mint set coins for collector sets as well as circulation-quality half dollars for numismatic sales in bags and rolls.

These copper-nickel clad and silver issues bear the singular 2014 date and the Mint mark of the respective Mint where each is struck. The Mint mark appears on the obverse, centered above the 0 and 1 in the date.

The 2014 Kennedy half dollars in the standard annual sets and the circulation-quality coins sold in bag and roll quantities will be struck from dies identical to those used in 2013 except for the date.

Additionally, an expected three versions, celebrating the 50th anniversary, will bear an obverse based on the 1964 sculpt, with one bearing a 1964 – 2014 dual date. These three coins will be in issued in gold, .900 fine silver and copper-nickel clad compositions. The three anniversary versions will appear with Chief Mint Engraver Gilroy Roberts’ original portrait of Kennedy as introduced on the coin in 1964.

The designs of Roberts’ Kennedy portrait for the obverse and Assistant Mint Engraver Frank Gasparro’s Presidential Seal reverse have been modified over the years. Among the changes, the rims are thinner on the current renditions of both obverse and reverse than on the 1964 obverse sculpt.

Back to the future

Antonucci explained that the original December 1963 bronze galvano for Roberts’ Kennedy portrait as well as the original 1964 obverse hub were scanned and converted into digital models.

The digital model of the galvano sculpt was scaled and repositioned to match the size and orientation of Kennedy’s portrait on the hub. A new basin was digitally created using the curvature of the basin from the 1964 hub.

According to Antonucci, the galvano scan data were then converted to a second new digital model, then carefully adjusted to match the approximate relief height of the 1964 hub portrait.

The 2014 restoration resulted in the maximum relief height from the basin to the highest point in the portrait being within 0.0005 inch from the 1964 original relief.

The rim on the restored obverse that will appear on the gold, silver and copper-nickel clad 50th anniversary versions is much wider than on the standard 2014 versions of all compositions and finishes. The reverse rim on all 2014 Kennedy half dollars, however, will be thin, as it will be the same width as used on the 2013 half dollars.

All of the standard versions of the 2014 coins will bear the single 2014 date. Mint marks will appear in their normal location, centered above the 01 in the date.

Likewise, the silver and copper-nickel clad 50th anniversary Kennedy half dollars will have a single date, also appearing as 2014, with the P Mint mark in the field above the date in the same position as on the standard versions. (In 1964, the D Mint mark on 1964-D Kennedy half dollars appeared on the reverse, below the eagle’s right talon.)

On the Proof gold Kennedy half dollar, the obverse will appear with dual anniversary dates: 1964 – 2014.

The W Mint mark of the West Point Mint, instead of being placed on the obverse, will appear on the gold coin’s reverse, as was the case with the D Mint mark on 1964-D half dollars. The W Mint mark is being positioned in the field just below the eagle’s right talon, to the viewer’s left.

To accommodate reverse inscriptions reflecting the coin’s weight in ounces of gold and the coin’s fineness as .9999 FINE GOLD, the eagle design was geometrically reduced in size by 5 percent, Antonucci said.

U.S. Mint officials have not released any details yet when they plan to offer the special collector versions of the anniversary Kennedy half dollars, in what product configurations and mintages, and pricing.