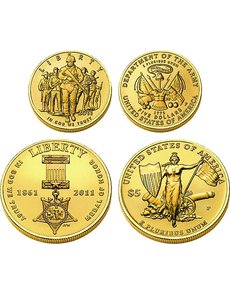 Sales of the Proof and Uncirculated 2011 U.S. Army and 2011 Medal of Honor gold $5 half eagles were suspended Aug. 11 for repricing because of the volatility in gold prices.

Because of the volatility in the price of gold, the U.S. Mint suspended sales of its gold commemorative coins for repricing at higher levels for the first time in Mint history.

Tom Jurkowsky, director of the U.S. Mint’s Office of Public Affairs, said Aug. 12 that the sale of Proof and Uncirculated 2011 U.S. Army and 2011 Medal of Honor $5 half eagles were pulled from the Mint’s numismatic product offerings sometime after the 5 p.m. Eastern Time close of regular business hours.

The Mint posted the following message on its website at www.usmint.gov:

“The United States Mint has suspended sales of commemorative gold coins for re-pricing,” according to the Mint alert. “Due to the current market volatility, we will be placing these coins on a ‘pricing grid’ similar to the structure we use to price American Eagle, American Buffalo and First Spouse gold coins.

“A new grid specific to these coins is being developed and will be posted when complete.”

A prepared follow-up statement released Aug. 12 by Jurkowsky further explains the Mint’s justification for the repricing.

“In the past, we have set a constant price for gold commemorative coins for the life of the program for consistency,” according to the statement. “Although the price of gold has been increasing steadily over the past few years, more recently gold has experienced wide volatility.

“Though the market has been volatile, the market value of the gold has not exceeded the selling price for the two 2011 commemorative gold products.”

The suspension of sales of the gold commemoratives follows the Aug. 9 suspension of sales for repricing and resumption on Aug. 10 of its other gold numismatic products. Prices were revised upward for the Proof and Uncirculated American Eagle coins, Proof American Buffalo coins, and Proof and Uncirculated First Spouse coins. (See related story Page 23.)

While the prices of the U.S. Mint’s primary gold numismatic products have been tied to a pricing grid since January 2009, the prices of gold commemorative coins have remained static throughout the life of an individual coin program.

The Proof half eagles for both commemorative programs were introduced at $449.95 and the Uncirculated versions at $439.95. The regular issue price for both versions was $5 per coin more than the introductory price. ¦