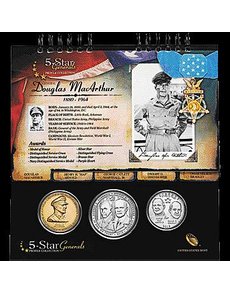 No sooner had the United States Mint announced that sales for the two 2013 commemorative coin programs would end Dec. 16 than the decision was made to extend the sales deadline another two weeks.

Collectors now will have until noon Eastern Time Dec. 31 to place their orders for individual coins and specially packaged numismatic products for the 2013 Girl Scouts of the USA Centennial silver dollar program and the three-coin 2013 5-Star Generals commemorative coin program.

Ordering options for the two programs for available products are listed below with the prices announced as of Nov. 6.

Pricing for the gold $5 coins may change according to the United States Mint’s pricing policy for numismatic products containing precious metals.

The commemorative silver dollar marks the 100th anniversary of the organization established on March 12, 1912, by Juliette Gordon Low in Savannah, Ga.

Add $4.95 to all domestic orders for shipping and handling.

Latest cumulative sales information by option for the two commemorative coin programs can be found at www.usmint.gov/about_the_mint/?action=coin_production. ¦