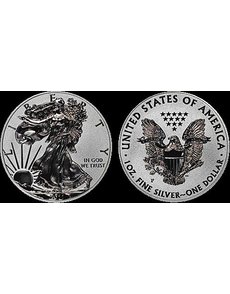 The Reverse Proof 2011-P American Eagle silver coin is one of two coins that are exclusive to the five-coin 25th Anniversary American Eagle Silver Coin set.

U.S. Mint officials settled on 100,000 sets for the maximum issue of 2011 25th Anniversary American Eagle Silver Coin Sets based on the availability of sufficient blanks and production capacity at the three Mint production facilities where the coins for the sets were struck, U.S. Mint spokesman Michael White said Dec. 8.

White said the production limit for the Anniversary set was a business decision based on many factors, “including reserving sufficient blanks for the anticipated high demand of the 2011 September 11 National Medals, and production capacity at our facilities, especially at Philadelphia where both the American Eagle Silver Reverse Proof Coin and 2011 September 11 National Medals are minted.”

White added, “Based on our experience with the American Eagle 20th Anniversary Set [a three-coin set in 2006, limited to 250,000 sets], the increased cost of silver at the time and the resulting price point, and the manufacturing constraints for the American Eagle Silver Reverse Proof being minted at Philadelphia, the decision was made to limit production of the set to 100,000.”

All 100,000 sets were sold in less than five hours on the opening day of sales Oct. 27. Mint customers reported encountering problems ordering the sets both by phone through the Mint’s contracted order fulfillment center in Indiana and online over the Mint’s website at www.usmint.gov.

Each order was restricted to five sets per household, with the total number of successful orders averaging 3.7 sets per order, according to Mint officials.

The Proof and Uncirculated 2011-W American Eagle silver dollars in the set, struck at the West Point Mint, were offered individually prior to the release of the set.

The San Francisco and West Point Mints both are striking American Eagle silver bullion coins for distribution through the U.S. Mint’s authorized purchasers.

The Proof 2011 National September 11 Memorial and Museum commemorative medals are being struck at both the Philadelphia Mint and West Point Mints, with production limited up to no more than 1 million pieces at each facility. The medals went on sale Sept. 8, but sales figures are well below the maximum mintages. Through Dec. 5, the U.S. Mint had recorded sales of 61,222 of the Philadelphia Mint strikes and 94,302 of the West Point Mint strikes.

Production of the national medals must end Dec. 31, 2012, no cut-off date for sales is mandated.

White said United States Mint officials are conducting a review of the development, promotion and release of the 25th Anniversary set.

“As we indicated several weeks ago after the product sold out, we are fully aware of the difficulties many of our customers faced with the release of the American Eagle 25th Anniversary Silver Coin Set,” White said Dec. 8. “We have undertaken an aggressive review of how we brought the product to market so we can better serve all of our customers in the future.”

According to White in the statement made Dec. 8, the United States Mint’s deputy director, Richard Peterson, “has also directed that the Mint review all future product offerings to ensure that we apply to them the lessons we learned from the marketing of the American Eagle 25th Anniversary Silver Coin Set.” ¦