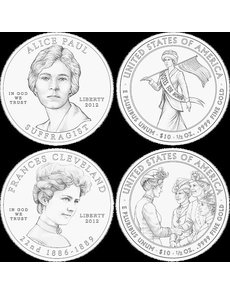 Problems during test striking of the Alice Paul and Frances Cleveland (first term) First Spouse gold $10 coins have delayed full production and release of all four 2012 First Spouse releases. U.S. Mint officials assure collectors all four coins will be struck and issued in 2012.

U.S. Mint customers who have ordered one or more of the First Spouse gold $10 coins issued from 2007 to 2011 are being individually notified by mail of production problems that have delayed the striking and release of all four 2012 First Spouse coins.

The Mint’s Office of Sales and Marketing is ensuring that thousands of customers will receive letters informing them of production delays for the 2012 First Spouse coins depicting Alice Paul, Frances Cleveland (first and second terms) and Caroline Harrison.

“The problem with the First Spouse Gold Coins stems from design issues and how the metal flows to fill the artwork,” according to a Sept. 13 statement from Mint officials released by Mint spokesman Michael White. “Because of our strong commitment to quality, we are adamant about ensuring we have this issue resolved before we begin actual production of the coins. We are confident we will be able to do so.”

The U.S. Mint’s deputy director, Richard A. Peterson, told Coin World during an Aug. 7 interview that during trial strikes at the Philadelphia Mint, metal flow problems were encountered with the Paul and Cleveland (first term) coins as well as proper surface quality.

Philadelphia Mint personnel are adjusting striking pressure on the coinage presses to address the fill issues and avoid what Peterson referred to as a “halo effect” around the devices.

Once the production problems have been cleared and final strikes approved, the Proof and Uncirculated 2012 First Spouse coins will be struck at the West Point Mint and bear the W Mint mark.

The letters being sent to Mint customers who have previously ordered First Spouse gold coins outline the Mint’s efforts to resolve the production difficulties.

“... As soon as we are certain the quality of these coins meets the standards you have come to expect, we will announce on-sale dates for each one,” according to the letter. “We apologize for the delay in releasing these coins.

“You are a valued customer of the United States Mint, and we look forward to continuing to serve you.”

U.S. Mint officials have not disclosed what specific steps have been taken and the progress made to rectify the production problems since Peterson’s Aug. 7 interview with Coin World. ¦