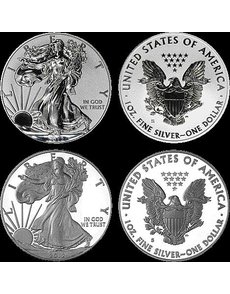 The U.S. Mint has established a price of $149.95 for the 2012 American Eagle San Francisco Two-Coin Silver Proof set.

The set goes on sale from the U.S. Mint beginning at noon Eastern Daylight Time June 7.

Sales of the set will run through 5 p.m. EDT July 5. The U.S. Mint plans to sell to meet demand, with no household ordering limits. A counter at the Mint website will allow customers to track sales.

The current San Francisco Mint facility marked its 75th anniversary on May 15.

Notice of the pricing, dated May 29, was posted June 1 on the Federal Register.

Both of the coins in the set bear the S Mint mark of the San Francisco Mint.

The Proof coin features laser-frosted devices against highly mirrored fields. To achieve the finish, the entire faces of both the obverse and reverse dies are first auto-polished; then the raised devices and legends (incuse in the dies) are frosted by a laser wielded by a robot following a computer-programmed template.

For the Reverse Proof dies, the incuse devices and legends (which will be raised on a struck coin) are manually polished using a rotary polishing tool and various grits of polishing paste containing crushed diamonds. After any polishing paste and residue is removed, each die is then placed into the laser-frosting device, which follows a computer-programmed template to frost the flat fields.

The finished planchets on which both coins are struck are highly polished and treated with a light coating of mineral oil to reduce friction and assist the release of the struck coin from the dies in the coining chamber.

The U.S. Mint switched to a specified ordering period with no household ordering limits for the 2012 sets after the public outcry involving sales of the five-coin 2011 25th Anniversary American Eagle Silver Coin Sets.

All 100,000 2011 sets were sold in less than five hours on the opening day of sales Oct. 27. Mint customers reported encountering problems ordering the sets both by phone and online over the Mint website.

Mint officials settled on 100,000 sets for the edition of the 2011 25th Anniversary American Eagle Silver Coin sets based on the availability of blanks and production capacity at the Mint facilities where the coins were struck. ¦