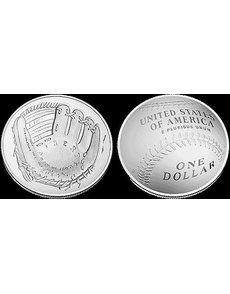 Experimental test strike from the Philadelphia Mint shows the concave obverse and convex reverse for the 2014 National Baseball Hall of Fame silver dollar.

The United States Mint faced two major hurdles in preparing for the 2014 National Baseball Hall of Fame commemorative coin program: selecting designs and learning how to strike the coins.

The U.S. Mint conducted a public design competition, which it had not done since 1991 when it invited the public to submit designs for the three-coin program celebrating the 1992 Olympic Games.

To select the design, the U.S. Mint conducted its first online design competition. It executed its Baseball Coin Design Competition by soliciting designs through the Challenge.gov website from April 11 through May 11.

The winning obverse design was submitted by 28-year-old San Luis Obispo, Calif., artist Cassie McFarland, who used a worn baseball glove from her childhood as inspiration.

McFarland’s design was one of 178 total submissions by entrants ages 14 and up.

In addition to an internal U.S. Mint review team that included artistic and technical personnel, the designs were also scrutinized by five members of the National Baseball Hall of Fame.

McFarland’s design was selected Sept. 9 from among 16 finalist designs.

McFarland receives a $5,000 award, and her designer’s initials will appear on the obverse of the gold $5 coin, silver dollar and copper-nickel clad half dollar.

Everhart’s adopted design of a stitched baseball similar to one used by Major League Baseball was refined from a spontaneous rendering at the Citizens Coinage Advisory Committee’s March 11 meeting.

The National Baseball Hall of Fame Commemorative Coin Act, Public Law 112-152, mandates for the $5 and $1 coins “that the reverse of the coin is convex to more closely resemble a baseball and the obverse concave, providing a more dramatic display of the obverse design chosen. ...”

The U.S. Mint eventually included the copper-nickel clad half dollar in the concave-convex development and execution, resulting in the first such convex-concave clad coin.

During the design competition, Steve Antonucci, branch manager for digital process and development at the Philadelphia Mint, led technical efforts to execute the coins.

The 2014 National Baseball Hall of Fame commemorative coins are slated to be offered for sale early in the year. ¦