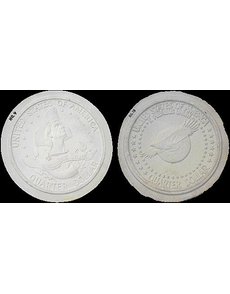 From the vaults of the Philadelphia Mint came these plaster models of two of the 12 finalist designs for the reverse of the 1776-1976 Bicentennial quarter dollar. 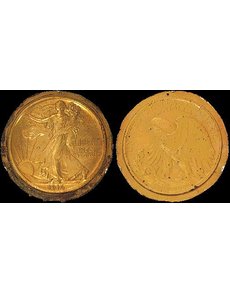 Sculptor Adolph A. Weinman designed the Walking Liberty half dollar introduced in 1916 for circulation. Shown are one set of models for a pattern executed by Weinman as he worked on refining the designs. 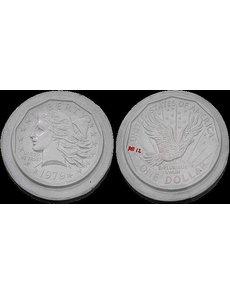 Frank Gasparro, the 10th chief engraver of the United States, executed models for a Flowing Hair dollar that he hoped would be adopted for the dollar introduced in 1979. Gasparro’s portrait of Susan B. Anthony was chosen instead.

U.S. Mint officials dug deep into the vaults of the Philadelphia Mint and pulled out a number of “heritage assets” for public display at the Aug. 7 to 11 American Numismatic Association World’s Fair of Money in Philadelphia.

“Heritage assets” are coins, medals, models, documents and other historical items associated with production of money in general. The U.S. Mint has thousands of these assets spread out at its facilities nationwide.

On public display in glass-enclosed, wooden display cases at the U.S. Mint’s booth at the convention were plaster models for proposed reverses for the 1776-1976 Bicentennial quarter dollar; unadopted obverse and reverse plaster models for proposed designs for the dollar coin in 1979; and plasters of a pattern by sculptor Adolph A. Weinman for the 1916 Walking Liberty half dollar.

Exhibited at the Mint booth were plasters from two of the nonselected designs – one depicting the portrait of a Colonist in tricorn hat, and the other of a flying eagle.

The two plasters have been held in Philadelphia Mint vaults since 1974.

The Weinman models for the half dollar represent a second set of designs that the sculptor created, with differences from the designs adopted for use on the regular issue coinage. A complete illustrated look at the Weinman half dollar patterns can be found on the USPatterns.com website at http://uspatterns.com/19haldolped.html.

The Flowing Hair design was passed over in favor of Gasparro’s portrait of Susan B. Anthony that was adopted for the obverse of the 26.3-millimeter dollar. The Anthony design was paired with an eagle reverse adapted from the reverse of the Eisenhower dollar, another Gasparro creation.

Until his death at age 92 in 2001, Gasparro continued efforts to promote the Flowing Hair portrait for the dollar coin, including for a new dollar to be introduced in 2000.

Sculptor Glenna Goodacre’s rendition of Sacagawea was selected instead.

Gasparro retired as the 10th chief engraver of the United States in 1981. ¦