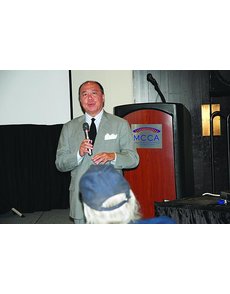 Officials of L & L Energy Inc. in Seattle announced Dec. 21 that Moy would be joining the firm Jan. 10 as its vice president of corporate infrastructure. Among the duties of his new position, Moy will be responsible for corporate development, global logistics and general administration.

L & L is a U.S.-based company since 1995 with coal mining and distribution businesses in China.

Moy was sworn in to a five-year-term as the 38th director of the United States Mint on Sept. 5, 2006, succeeding Henrietta Holsman Fore.

Prior to assuming his duties as director of the Mint, Moy was a special assistant from 2001 to 2006 to President George W. Bush for presidential personnel at the White House. Moy was responsible for recommending candidates to the president for the most senior political appointments for 11 cabinet departments and cabinet-rank agencies, 32 independent federal agencies, and 14 part-time presidential boards and commissions.

Prior to his public service in the White House and Mint, Moy spent eight years working with venture capital firms and entrepreneurs. From 1989 to 1993, Moy served President George H.W. Bush as a political appointee at the federal Health Care Financing Administration at the U.S. Department of Health and Human Services. Moy has also served as a sales and marketing executive for Blue Cross Blue Shield of Wisconsin.

Moy graduated from the University of Wisconsin in 1979 with a triple major in economics, international relations and political science. He and his wife, Karen, have a daughter, Nora.

In his remarks to all Mint employees about his departure, Moy praised their performance during his tenure.

“I’m proud of the progress we’ve made over four and a half years,” Moy said. “The Mint is a better place and delivering more value to the American taxpayers. The foundation has been rebuilt and the work is now in your capable hands,” he said. “Please know that I will always remember my being director of the United States Mint as a special time in my life.”

Moy’s five-year term was scheduled to expire in September 2011.

Still waiting to be produced and presented to Moy is his Mint director’s medal, designs for which have not yet been announced. ¦