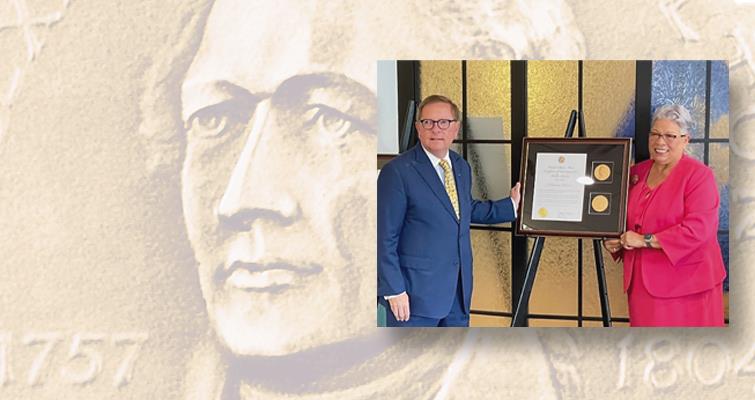 Pennsylvania collector Thomas J. Uram was recognized for his service on the Citizens Coinage Advisory Committee on June 14 by Ventris C. Gibson, the day before the U.S. Senate confirmed her as the 40th director of the United States Mint. 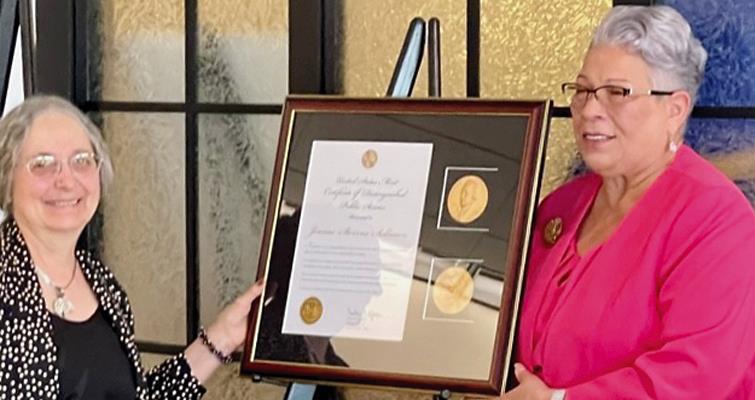 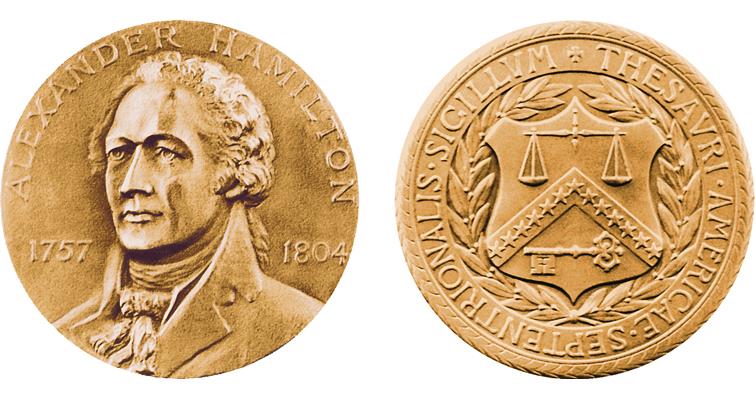 Framed displays presented to Uram and Stevens-Sollman as CCAC members each include a 3-inch bronze medal depicting the first secretary of the Treasury, Alexander Hamilton, with the portrait obverse facing out. 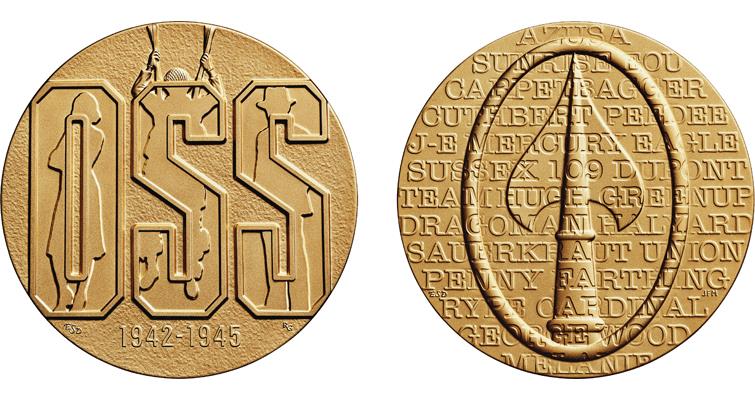 For inclusion in his membership recognition, Uram also chose a 3-inch bronze duplicate of the 2016 congressional gold medal recognizing the Office of Strategic Services, the World War II forerunner of the Central Intelligence Agency, with the medal’s reverse facing out.

Two-term members of the Citizens Coinage Advisory Committee — Pennsylvania collector Thomas J. Uram and Pennsylvania medallic sculptor Jeanne Stevens-Sollman — were recognized for their service June 14 by Ventris C. Gibson, the day before the U.S. Senate confirmed Gibson to a five-year-term as the 40th director of the United States Mint.

Both Uram and Stevens-Sollman were CCAC appointees serving the interests of the general public.

Uram was recommended for his first four-year-term in 2012 by Speaker of the House John Boehner and named by Treasury Secretary Timothy F. Geithner; and for his second term in 2016, recommended by Speaker of the House Paul D. Ryan and named by Geithner. Uram was appointed CCAC chairman for the 2018 and 2019 calendar year by former Treasury Secretary Steven Mnuchin.

Uram and Stevens-Sollman remained serving the CCAC beyond their established terms until replacements could be appointed and seated.

Both Uram and Stevens-Sollman were also able to select, for inclusion with the Hamilton medal, a 3-inch bronze duplicate of any congressional gold medal of their choice for which the CCAC considered and recommended proposed designs during their tenure.

Uram selected the medal recognizing the Office of Strategic Services, the World War II forerunner of the Central Intelligence Agency, and requested the obverse side facing out.

For her bronze duplicate medal, Stevens-Sollman selected the St. Regis Mohawk Code Talkers medal, one of 33 Code Talkers medals for which the CCAC recommended proposed designs honoring Native American tribes that served in the U.S. military during World War II.

The chairman’s recognition did not include a second Hamilton medal.

The 11-member CCAC was established in 2003 to replace the decade-old Citizens Commemorative Coin Advisory Committee, which was responsible solely to consider designs for commemorative coin programs.

Now, like the Commission of Fine Arts, the CCAC considers proposed designs for all U.S. coins and medals. 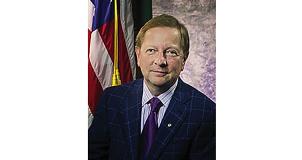 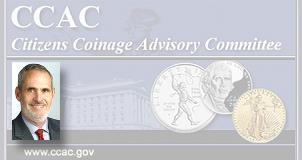