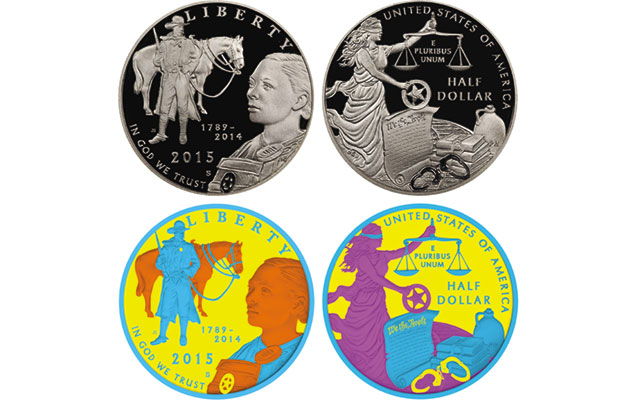 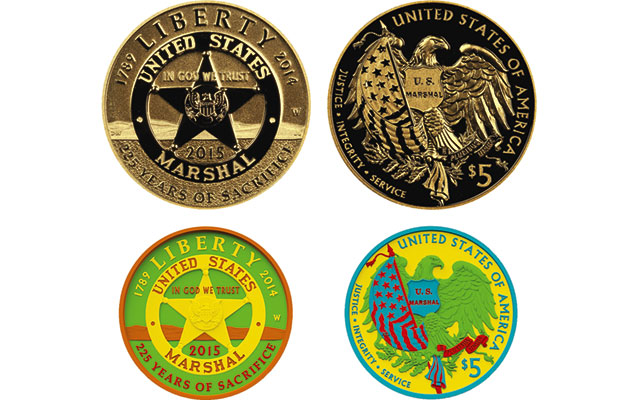 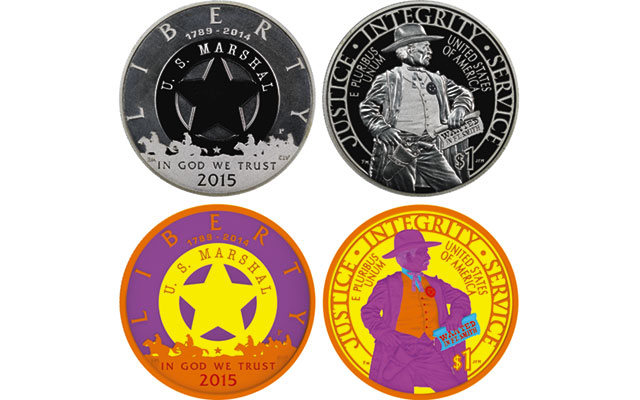 According to U.S. Mint officials, for both obverse and reverse, the intent was to accentuate the artistic detail sculptured into the respective designs while adding visual interest with unique combinations of polishing and frosting.

On the gold and silver obverse designs, the badges depicted are highly polished, while the field, artwork and lettering received varying degrees of laser frosting.

On the gold coin’s obverse, in addition to the badge receiving the mirrored Proof finish, Proof polishing was used on 1789 LIBERTY 2014 and the W Mint mark.

Polishing with horse hair was used on the gold obverse on 2015 and 225 YEARS OF SERVICE.

Light frosting was executed on the flat fields, with standard (moderate) frosting for the rim, UNITED STATES MARSHAL and IN GOD WE TRUST.

On the silver dollar obverse, U.S. MARSHAL received horse-hair polishing along with IN GOD WE TRUST and 2015. Standard laser frosting was used for the rim and details of the Marshals on horseback, on LIBERTY, 1789 – 2014, and the initials RM and CLV. The initials are, respectively, for U.S. Mint Artistic Infusion Program Artist Richard Masters, who created the design, and U.S. Mint Sculptor-Engraver Charles L. Vickers, who sculptured the design.

“Light Plus” frosting was used on the background of the silver coin’s obverse.

On the half dollar obverse, heavy frosting was used on the rim, LIBERTY, 1789 – 2014, IN GOD WE TRUST, 2015, the S Mint mark, the female marshal’s overcoat, the male marshal, the horse’s bridle and reins, and the designer’s initials, JI (for AIP Artist Joel Iskowitz), and on MG (for U.S. Mint Medallic Sculptor Michael Gaudioso, who sculptured it). Standard frosting was used for the horse, the female marshal’s head and hair, and the satchel.

In addition to the flat fields, Proof polishing was used on the marshal’s badge on the satchel and on the badge of the male marshal.

On the gold, silver and copper-nickel clad reverses, the field is highly polished with elements of the artwork and lettering receiving varying degrees of laser frosting, depending on the specific designs of each.

On the gold $5 coin’s reverse, the rim, UNITED STATES OF AMERICA, $5, the shield, the background of the flag, and JUSTICE??INTEGRITY??SERVICE received heavy frosting.

Horse-hair polishing was executed on U.S. MARSHAL on the shield, the ribbon with E PLURIBUS UNUM, the flag staff and flag stars and stripes. The eagle, olive and oak branches received light frosting.

On the Marshals Service silver dollar reverse, heavy laser frosting was executed on the wanted poster held in the marshal’s left hand and on his shirt. Horse-hair polishing was used on the marshal’s badge, the buttons on his vest and WANTED IN FT. SMITH on the poster.

Standard frosting was used on the rim, JUSTICE INTEGRITY SERVICE, E PLURIBUS UNUM and UNITED STATES OF AMERICA, the border, the denomination depicted as $1, the Marshal’s vest, and the initials FM and JFM (for AIP Artist Frank Morris, who designed the reverse, and U.S. Mint Medallic Sculptor Joseph F. Menna, who sculptured it).

Light Plus frosting was used on the marshal’s head and the remainder of his clothing, including his hat, tie, coat, gloves, pants, belt, gun and holster.

On the half dollar reverse, in addition to the mirrored Proof fields, the handcuffs and WE THE PEOPLE also received Proof polishing. Heavy frosting was executed for the rim, the blindfold, the scales, UNITED STATES OF AMERICA, E PLURIBUS UNUM, HALF DOLLAR, the U.S. Constitution, whiskey jug (on which appear the initials PH, for U.S. Mint Medallic Sculptor Phebe Hemphill, who sculptured the design) and school books.

Light Plus frosting was applied to the personification of Justice, the initials SG for AIP Artist Susan Gamble, who created the design, the marshal’s badge, and the base on which Justice stands.