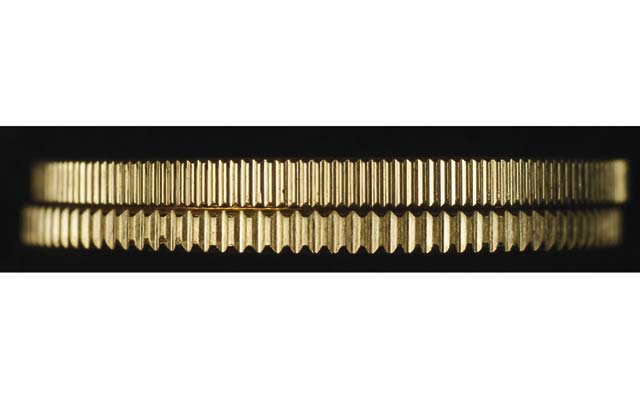 The 2014 and 2015 American Eagle tenth-ounce gold bullion coins were intended to have a Wide Reeds edge. However, U.S. Mint officials consider production from two edge collar types to be variants, not errors. Mint officials stated that multiple edge collars were used in production as part of standard tooling.

Adam Stump, the Mint's deputy director of for the Office of Corporate Communications, said via email June 23 that the Narrow Reeds collar type is currently being used in production of First Spouse $10 gold coins.

In response to a follow-up question, he added, "We are not aware of First Spouse coins that have been struck with the Wide Reeds collars. The two collars have not been used interchangeably for the whole First Spouse series. Only the Narrow Reeds has been used for this series."

With the June 23 acknowledgment, Mint officials also disclosed that the number of 2014 American Eagle tenth-ounce gold coins likely produced with the Narrow Reeds edge variant is approximately 15,000. Previously, only two examples were reported known, both of which were certified Mint State 69 by Numismatic Guaranty Corp. The discoverer of the first two known 2014 examples, North Carolina collector Darrell Hicks, sold the second piece he discovered for $28,650 in May in a private transaction. He kept the discovery coin.

Hicks knew about NGC's January report concerning the 2015 American Eagle tenth-ounce gold coin edge variants, but did not immediately suspect that the edge variant may have been used on earlier-dated coins in the series.

"The United States Mint recently reviewed first strike coins and records related to the production of 2014 One-Tenth Ounce American Eagle Gold bullion coins," Stump said via email. "The Mint determined approximately 15,000 2014-dated coins may have been produced with a narrow reed edge. By reviewing the first coin strikes from each die that the Mint saves, the Mint was able to estimate how many coins may have been produced with the narrow reeds.

"This narrow reed collar for the one-tenth ounce coin is the same type of collar used in 2008 when the Mint produced the American Buffalo fractional coins. The Mint currently uses the narrow reed collars for the First Spouse gold coins."

Also, Stump added, "We are not aware of any edge variants being discovered among the W Mint marked Proof coins."

Examples of the Narrow Reeds 2015 American Eagle tenth-ounce gold bullion coin have been selling for significant premiums on the secondary market over the Wide Reeds variant.