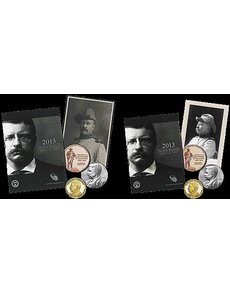 The 2013 Coin and Chronicles Set — Theodore Roosevelt will include a print of the front-facing portrait of Roosevelt in his Rough Rider military uniform, left, and not the side portrait originally publicized, right.

The print of Theodore Roosevelt initially announced by the U.S. Mint for inclusion in the 2013 Coin and Chronicles Set — Theodore Roosevelt has been replaced with another because the Mint did not have proper authorization to use the original choice.

The set went on sale at noon Eastern Time Dec. 17.

The initial print included in a Mint-released collage of the set’s intended components shows a portrait facing left of the future 26th president in his Rough Rider uniform, recognizing his military service. The source of the image was the Theodore Roosevelt Collection, Houghton Library, at Harvard University.

The library had granted the Mint permission to use, on the cover packaging for the set, an image of Roosevelt facing forward in a suit as the governor of New York.

The library had also granted permission to use a different print from its collection, of Roosevelt in military garb but in a portrait facing forward. Mint spokesman Michael White provided Coin World with a new collage Dec. 12, showing that print.

? One .999 fine silver Roosevelt medal. The medal will be struck on the same 40.6-millimeter planchets as are used for the American Eagle 1-ounce silver coins. The medals will have no specialized finish.

Originally, the medal design was produced by the U.S. Mint to recognize Roosevelt’s second term, served from 1905 to 1909. The original medal was previously struck in bronze at the Philadelphia Mint, the same facility where the silver version for the set is being produced.

The set also includes a booklet with educational information about the 26th president of the United States, highlighting his legacy as soldier, statesman and conservationist.

While sales of the set could extend beyond Dec. 31, 2013, if inventory remains, the dollar coin in the set cannot be struck after that date.