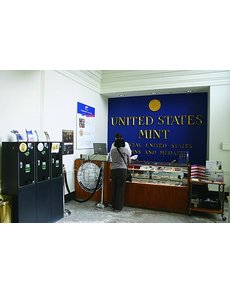 The U.S. Mint plans to fold its Union Station sales operation, including personnel, into the Mint’s sales outlet on the first floor of Mint headquarters, the location shown in this photo taken in 2009.

U.S. Mint officials have written off more than $80,000 that was lost or stolen from the public and employee coin exchange program at Mint headquarters in the District of Columbia.

An audit report released Nov. 22 by the Treasury Department’s Office of Inspector General attributes the losses to a failure of the Mint’s Sales and Marketing Division to properly maintain the coin exchange program. The losses date back to 2008.

The Mint operates change machines on the first floor of its headquarters building that dispense at face value circulation strikes of the latest commemorative quarter dollars, Presidential dollars and Native American dollar. Each design is replaced when a new coin design in the series is released. Both Denver Mint and Philadelphia Mint strikes are available.

The 22 coin exchange programs operated during the period targeted by the OIG investigation also included the four 2009 Abraham Lincoln Bicentennial commemorative cents, distributed in 50-coin wrapped rolls that were dispensed over the counter rather than through the change machines. The Lincoln cent rolls were available at the sales center at Mint headquarters only on the day of the official ceremonial release of the coins.

According to the Nov. 22 audit report by the Office of Inspector General, U.S. Mint officials contacted the OIG after financial discrepancies totaling $9,264 were found in the coin exchange program related to closing out the 2008 John Quincy Adams Presidential dollar program. An internal review by the Mint’s Planning, Budget and Internal Control Division was prompted by an inquiry by the Treasury OIG following the Mint’s initial report to Treasury. The OIG, in turn, undertook an audit, according to the OIG report, to determine whether the Mint had taken appropriate actions following its internal review, because the coin exchange program had operated for several years without proper control and accountability.

During the Mint’s internal review, Mint investigators could not determine whether the $9,264 discrepancy was caused by loss or theft, according to an internal Mint report titled Review of Coin Exchange Program Managed by Sales and Marketing (SAM). The Mint issued its final report on Dec. 2, 2010.

The Mint internal report “identified 4 findings and 13 recommendations,” according to the OIG audit report.

? No coin exchange program reconciliations were performed from 2005 through 2009.

? The program lacked a complete set of records/documents to demonstrate that all coins exchanged, cash proceeds and unused coins were accounted for in the records.

? Coin machine exchange program functions were not properly segregated and the results were not reviewed and approved by management.

? The program had deficiencies related to the physical security of the vault and the coin machines.

“In response to one of the findings,” according to the OIG audit report, U.S. Mint officials attempted to reconcile the coin exchange program activities, and wrote off in September 2010 a total discrepancy “in the form of a loss, of $82,215 for unresolved differences for coin programs dating back to 2008. That amount represents differences the Mint identified from 22 coin programs in all.”

As a result of the Mint-identified deficiencies, “the report recommended that the Mint restrict access and enhance security to the vault and coin machines, finalize the [standard operating procedures], establish controls and oversight of cash transactions, make timely deposits, adopt reconciliation processes, and require reviews of documents retained to support the program.”

The Mint had followed through with all corrective measures for enhancing security but delayed implementation of one, according to the Nov. 22 OIG audit.

The security measure delayed was the addition of a camera and additional card readers to record employee access to the vault used to store the new coins at its headquarters building and in a controlled area outside the vault. U.S. Mint officials had committed to fulfilling the recommendation by Dec. 31, 2010, but fulfillment was delayed pending implementation of other security upgrades in 2011 to the Treasury’s Personal Identity Verification system.

By the fall of 2011, the Mint’s Office of Protection had installed an access card reader outside the fifth floor vault and a camera inside the vault. The OIG audit verified installation of these final security devices.

The OIG audit also found additional weaknesses that needed to be addressed, specifically deposit delays and the lack of regular reconciliations.

U.S. Mint officials attributed the deposit delays to the unwillingness of local banks to accept large volumes of coins, especially dollar coins, since the banks end up returning most of the dollar coins to the Federal Reserve.

Following its internal review, the Mint adopted a standard operating procedure with a targeted “deadline that all deposits of unused coins are made within 15 days after a coin program ends.” The Mint internal review found that for three quarter dollar programs and one Presidential dollar program closed out in 2010, the time from the end of a program to the time of bank deposit ranged from 25 to 137 days.

In one of its findings, the OIG recommended the Mint enhance its procedure for meeting the 15-day deposit deadline. In response to the OIG recommendation, the Mint purchased a coin rolling machine to streamline the deposit process.

The Mint is now meeting the 15-day deadline because of implemented enhancements, according to the OIG.

In addition, in response both to the establishment of an updated standard operating procedure by the Mint following its internal review and to OIG recommendations, the Mint implemented measures to monitor and reconcile each of the coin releases offered under the coin exchange program on a monthly basis.

The OIG audit found that the monthly reviews “were performed through October 2011.”

The full OIG audit report released Nov. 22, 2011, can be found online at www.treasury.gov, by clicking on the link for “Inspectors General.” ¦