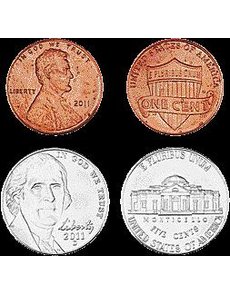 Coinage metal alternatives for the copper-plated zinc cent and copper-nickel Jefferson 5-cent coin were the main target of U.S. Mint officials to reduce production costs, but research and development currently under way addresses possible replacements for all circulating denominations.

The test strikes were produced as part of a two-year research study seeking alternative metals to reduce production costs.

Additional trial strikes are scheduled to be conducted in February or March at the Philadelphia Mint, according to Tom Jurkowsky, director of the U.S. Mint’s Office of Public Affairs.

Jurkowsky did not disclose what possible composition alternatives are being studied, only to say that many of the alternatives being looked at as viable candidates are currently in use in other countries for coinage.

The Mint has been battling the rising costs of copper, zinc and nickel that for the past five years have kept the combined metal acquisition, production and shipping costs for the cent and 5-cent coin above face value for each coin. The U.S. Mint’s recently released annual report for Fiscal Year 2011 noted that the cost to produce the copper-plated Lincoln cent is 2.41 cents, while that for the copper-nickel Jefferson 5-cent coin is 11.18 cents.

The alternative metals study, examining all circulating coin denominations is being conducted under provisions of the Coin Modernization, Oversight and Continuity Act of 2010, signed into law by President Obama on Dec. 14, 2010. The act not only gives the Mint authority to examine new compositions for the cent and 5-cent coin, it also extends the alternative metals study to encompass all circulating coin denominations.

“We are using recently created enhanced Martha Washington nonsense dies with images that more closely resemble current coinage in order to obtain the most realistic testing and support evaluation,” Jurkowsky said. “The nonsense pieces struck will be analyzed and tested as part of the study.”

The images on the dies were digitally created. U.S. Mint officials declined to provide images of the obverse and reverse of the nonsense dies nor any trial strikes produced from them. In past test strikings over recent decades, the Mint has used various renditions of a portrait of Martha Washington on the obverse and the Washington home at Mount Vernon to produce the experimental pieces.

Jurkowsky said multiple metallic alternatives were used for the December trial strikes. Jurkowsky did not disclose the compositions of any of the alloys that were tested.

“At this point, it is premature to provide details about the alternatives that were tested,” Jurkowsky said. “In general, we plan several phases of testing. First is an initial coinability test to answer the question whether the material makes a suitable coin (proper image, wear, EM [electromagnetic] signature, etc.). This will be followed by more extensive test strikes for likely candidates.

Although not a specific part of the Alternative Metals study that provides the authority to produce the test strikes, the U.S. Mint has also studied various die steels and continues to do so in support of improving costs and extending die life, Jurkowsky said.

The alternative metals study is being coordinated with the Mint by Concurrent Technologies Corp., under a $1.5 million contract awarded to CTC on Aug. 24, 2011. The contract runs through June 30, 2013.

According to the CTC website, CTC is an independent, nonprofit, applied scientific research and development professional services organization providing innovative management and technology-based solutions to government and industry.

The alternative metals research and development is being overseen by CTC’s chief scientist, Dr. Joseph Pickens. CTC has coordinated with an undisclosed number of suppliers for submission of sample metallic materials.

In its recommendations to the United States Mint, CTC, according to Pickens, will address various factors, such as the effect of new metallic coinage materials on the current suppliers of coinage materials; the acceptability of new metallic materials; costs of metallic material, fabrication, minting and distribution; metallic material availability and sources of raw metals; coinability; durability; effect on sorting, handling, packaging and vending machines; appearance; risks to the environment or public safety; resistance to counterfeiting; and commercial and public acceptance.

“This is a great opportunity for CTC to implement our materials expertise, currently used to solve Department of Defense problems, in an entirely new area,” Pickens said.

These are the current compositions for circulating U.S. coins:

? Kennedy half dollars: struck in the same composition as the dime and half dollar; half dollars have been struck for numismatic sales only since 2002, with none placed into general circulation.

The remaining denominations are struck from blanks punched out of coiled coinage strip. The Mint currently enlists the services of two coinage strip providers — Olin Brass in East Alton, Ill., and PMX Industries in Cedar Rapids, Iowa. PMX is an American subsidiary of Poongsan Corp., the world’s largest manufacturer of coinage blanks, based in Seoul, South Korea.

The Mint produces its own planchets from the strip provided by the contractors. ¦