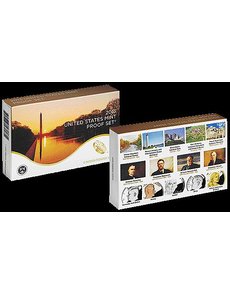 Beginning with the 2013-S edition, the three lenses containing the coins for the annual regular Proof set will be housed in full-color, illustrated outer boxes with narrative information about select coins.

All of the coins in the set are struck at the San Francisco Mint and bear the S Mint mark.

? One Native American dollar with a reverse that features a turkey, howling wolf and turtle (all symbols of the clans of the Delaware Tribe), and a ring of 13 stars to represent the original Colonies, reflecting the theme of “The Delaware Treaty (1778).”

? One Kennedy half dollar.

The coins are sealed in three protective lenses. For 2013, the coin lenses will be packaged in a new outer carton. The front of the carton displays an image of the Washington Monument at sunrise. The back of the carton displays an image of each national park or site honored in 2013, its name, the state, and the year in which the site was established as a national site; a portrait of each president, the president’s name, and the years served in office; and the partial coin images of the obverses of the remaining coins.

The U.S. Mint accepts orders through its online catalog at www.usmint.gov/catalog, and by telephone at 800-872-6468.

All domestic orders will be assessed a shipping and handling fee of $4.95 per order. ¦