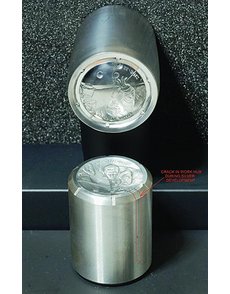 Tooling issues encountered during early development of the silver dollar are exhibited on this work hub that cracked along the shaft during hubbing testing.

The research and development team at the Philadelphia Mint has faced multiple challenges with the 2014 National Baseball Hall of Fame commemorative coins program.

The program entails production of a gold $5 half eagle, silver dollar and copper-nickel clad half dollar.

The baseball glove obverse for the series will be concave; the common convex reverse will follow the curvature of a baseball.

As part of its research and development efforts, Mint technical staff had to resolve dome configurations and design relief issues, said Steve Antonucci, branch manager for Digital Development, Research & Development for the U.S. Mint at Philadelphia. (See related articles in the Nov. 18 issue of Coin World.)

As part of the testing, more than 67,000 experimental strikes had been executed by Oct. 28, with thousands more pieces expected to be struck in the weeks ahead. To that October date, testing had primarily focused on the Uncirculated coins, with testing of Proof pieces expected in the future.

Antonucci said Nov. 7 that production tooling is currently being developed to test all denominations up to the approved trial strike phase.

“All Proof denominations will be tested as well,” Antonucci said by email, “Polished and laser-frosted dies react differently to striking forces so we need to test every aspect of the baseball designs (uncirc & proof) to prove out the running tonnages, press issues, etc.”

All research and trial strikes are being performed in the new coin development section of the Philadelphia Mint, Antonucci said. All coins and dies are stored in vaults with tight inventory control, he said.

Antonucci said he has taken steps to preserve all of the master tooling as well as select examples of the research dies, blanks and struck coins.

U.S. Mint officials will determine the disposition of the materials at the appropriate time, including whether any representative materials will be presented to the National Numismatic Collection at the Smithsonian Institution’s National Museum of American History.

Experimental strikes include those using the approved designs and those using nonsense designs, the latter featuring dies bearing a shooting pool player on the obverse with an 8-ball that is encircled by stitching on the reverse to resemble the baseball.

“My technical staff knew we had to create geometry for the obverse and reverse that had relative levels of complexity, heights of relief, curvature, and mass,” Antonucci said. “The challenge was in what design to pick. We did not want to use baseball as the theme [on the early experimental strikes].

“In an early development meeting including the artists, I mentioned that we were clearly behind the 8 ball on this project.”

Antonucci said a suggestion was made to use a pool player for the obverse; Antonucci contributed the suggestion for using the 8-ball reverse.

The nonsense and approved designs were used in various combinations. Experimental blanks included bronze for the silver dollar and gold $5 strikes in addition to the legislated alloys.

All experimental strikes for the half dollar denomination employed copper-nickel clad half dollar planchets.

Part of the testing involved different heights of the dome on the convex reverse.

Antonucci said the Mint had concerns during the early experimental phases over the likelihood of delamination of the copper-nickel clad layers — the separation of the three layers of metal in the clad composition.

Delamination concerns were eliminated when the full dome curvature on the convex reverse was reduced to a half-dome height for optimal die life, Antonucci said.

In creating the dies used in striking the various experimental pieces, Mint technicians used a range of technologies.

A 3-D, noncontact digital scanner captures the surface detail of the plaster model that has been digitally designed and fabricated. The scanner constructs a resultant mesh, or surface map, Antonucci said.

Due to the diameter of the plaster models, the 3-D digital scanner can only capture one small rectangular segment at a time, Antonucci said. The model is rotated for subsequent scans, he said.

“We repeat this process many times until we have a complete quilt-like structure of 3-D information,” Antonucci said. “This is where [what he termed as] the little black targets come into play. They are essentially 3-D spatial placeholders so that the quilted scan data can be assembled into one complete model with no deviations between each scan.

“The multitude of redundant scan points are summarily removed and the resultant data prepared for the 3-D design phase.”

As part of the testing process for the Uncirculated versions of the three denominations, the Philadelphia Mint’s technical staff manufactured CNC-machined working dies directly from digital designs, the first time this approach was used in production at the U.S. Mint, Antonucci said.

For silver dollar and gold $5 coin production, U.S. Mint personnel are cutting out two of the steps for manufacturing work dies, by going directly to hubbing test dies from the CNC reduction, Antonucci said.

“The Mint will employ a single-squeeze hubbing into die steel of the first stage reduction, which will produce a negative image (or die) of the designs,” Antonucci said. “In normal production, the CNC reduction (or master hub) is used to produce the master die in the negative, and subsequently the working hub in the positive.

For the production of half dollar work dies, the normal production sequence will be followed: a CNC reduction, master die, working hubs and work dies, he said.

Tooling is being manufactured and stockpiled to meet anticipated demand. The authorization legislation provides for the production and release in Proof and Uncirculated versions combined of up to 50,000 gold coins, 400,000 silver dollars and 750,000 copper-nickel clad half dollars.

During the testing of the approved designs, Mint staff had to tweak both of the designs.

On the reverse design, adjustments had to be made to the lettering in their spacing, relief and orientation “to accommodate the curvature of the spherical ball, with the letters modified to follow the bends,” Antonucci said. On the obverse, the wheat ears from the original glove design were removed so they would not be confused as stitching, he said.

During development, the initial obverse glove design used was smooth. As the development team moved closer to production, a leather-like texture was applied to the glove to make it look more authentic, Antonucci said.

“This yielded some unexpected metal flow issues,” he said. “Accordingly, reverse ball stitching as well as some areas of the glove required some minor height of relief changes.”

For the Proof versions, the finish on the glove will be a combination of digital texturing and laser frosting, Antonucci said. Some challenges are expected with Proof polishing techniques because of the unusual contours of both the obverse and reverse, he added.

Blanks for the Proof and Uncirculated gold $5 coins and silver dollars will be hand-fed into the coinage press.

The half dollar blanks are set to be positioned between the obverse and reverse dies employing an automated feeding approach. ¦