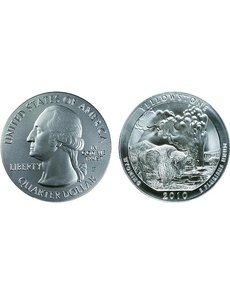 Mint officials seek to prevent errors such as the lack of a vapor-blast finish on the reverse of this 5-ounce coin.

White said the U.S. Mint late in 2010 began the procurement process to obtain the new equipment to handle projected increased production for Uncirculated 2011-P and later America the Beautiful 5-ounce silver coins. The new machinery has not yet been received for installation at the Philadelphia Mint, White said.

“While we have ordered new equipment to execute automated vapor blasting on the America the Beautiful 5-ounce silver Uncirculated coins, we are currently using the process originally used for our 3-inch medals,” White said. “That equipment required retro-fitting and readjustment for the process, and has required additional maintenance due to the higher volume and substantially increased wear of this program.

“The new equipment will allow us to move from the manual, batch process to more closely integrate the vapor blasting application into the overall production line for the coin,” White said.

“From photographs we have received, and reports from coin grading services, it is apparent that several varieties of America the Beautiful 5-ounce silver Uncirculated coins exist with differing or missing vapor blast finishes,” White said.

“We are looking into the cause of the inconsistency in finishes, examining each step in the post-production process when vapor blasting is applied. We are committed to restoring the consistency for which United States Mint products are known worldwide.” ¦