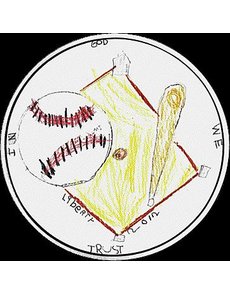 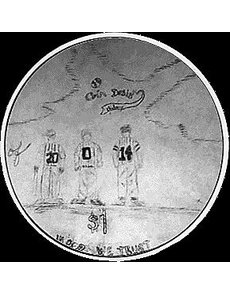 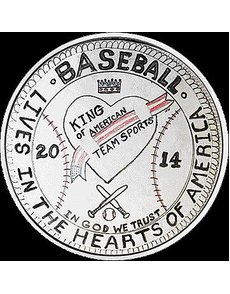 The youthful designers who are the grand prize winners and 16 runners up in three age categories in the United States Mint’s Kids’ Baseball Coin Design Challenge used a wide range of approaches at portraying the sport often called the “national pastime.”

The design challenge conducted by the Mint ran parallel to the bureau’s Baseball Coin Design Competition for participants 14 years of age and older. The adult competition was conducted seeking a design for the common concave obverse for the 2014 National Baseball Hall of Fame commemorative gold $5 coin, silver dollar and copper-nickel clad half dollar.

The Kids’ Baseball Coin Design Challenge offered youths ages 0 to 5, 6 to 10 and 11 to 13 the opportunity to contribute designs with the subject theme “What’s Great About Baseball.”

None of the designs entered in the children’s challenge were under consideration for the adult competition.

All 19 winners were determined by the public in online voting.

The U.S. Mint disclosed only the first names of the grand prize winners and runners up, for security reasons.

Mollie’s grand prize submission, in the 0 to 5 age group, depicts a full-color baseball diamond over which is superimposed a stitched baseball to the left and a bat to the right. Her submission included her comment that her favorite thing about baseball is singing “Take Me Out to the Ball Game.”

Ethan’s grand prize contribution, in the 6 to 10 age group, submitted with the theme “Hard Work,” depicts three players, from the back, standing side by side. The player at left is supported on his left by a ball bat. An attempt at the coin’s year of release is reflected in the numerals that appear on the backs of the players’ uniforms — 20, 0 and 14.

Walter’s grand prize winning design, for the 11 to 13 age group, features the inscription BASEBALL LIVES IN THE HEARTS OF AMERICA inside a dentiled border, encircling a stitched baseball that has the issue year split with 20 to the left side and 14 to the right. At the center is a heart inscribed KING OF AMERICAN SPORTS, with a red, white and blue colored flag ribbon pulled through. A crown appears above the heart; crossed bats and a baseball are below.

The remaining design winners and their designs can be found online at www.usmint.gov/kids/kidsbatterup/.

The children’s contest ran from April 11 through June 28, with online voting running from the close of design submissions through July 30. ¦