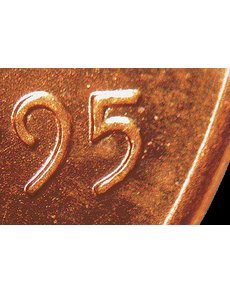 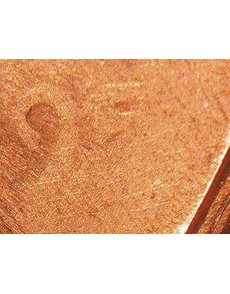 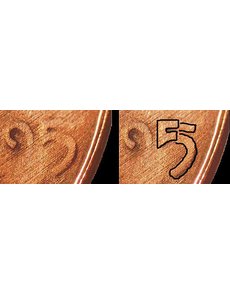 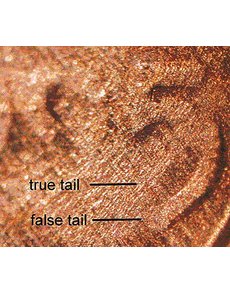 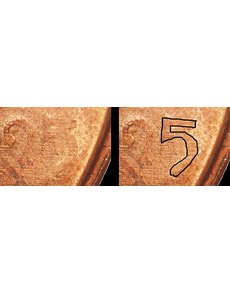 Previous
Next
Oil, grease, dirt and other contaminants that coat a die or clog its recesses have a well-known potential for generating accessory design elements on the surface of a coin.
Dropped fillings of compacted die fill will leave behind incuse traces of whatever design elements they once occupied in the die face (Collectors’ Clearinghouse, April 19 and Aug. 16, 2010; Oct. 29, 2012). A thin film of oil or grime can produce a range of surface film effects, including surface film doubling, surface film afterimages, and surface film transfer (Collector’s Clearinghouse, Sept. 1, 2008, and May 2, 2011). I’ve even seen one case in which a thick patch of die fill attached to one die was struck by the opposite die during a clash. When it struck the next planchet, it left a brockage behind. In other words, the incuse, mirror-image design elements on the surface of the coin were generated by struck die fill, rather than a piece of struck metal.
All of these extra elements are either incuse or lie at the same level as the field or design. But it now appears that die fill or “grease” has one more trick up its sleeve — the production of accessory raised design elements.
The phenomenon has so far been observed only in 1995 Lincoln cents and involves only the last digit of the date. In some of these “grease-struck” cents we see the emergence of a second raised 5 lateral to the normal digit. Like a scene from Invasion of the Body Snatchers, the replicant grows alongside the original and eventually replaces it.
For reference purposes, the first photo shows a normal date, and the second, a 1995 cent struck through “grease.” For reasons we don’t understand, as with most copper-plated zinc cents the substance was smooth and imparted no texture of its own to the coin. Instead it helped preserve the original streaky surface of the unstruck planchet.
Our third example shows the appearance of the false digit to the right of its normal counterpart. The upper bar and lower curve of the secondary digit are larger than the normal version and rotated slightly clockwise.
A similar state of development characterizes our fourth piece; here the tail of the secondary digit lies alongside the faint tail of the primary digit.
In the fifth and last cent, the original digit is no longer visible and the secondary digit has taken its place.
At least two die pairs are represented among the three pieces with secondary digits.
While the appearance of these secondary numerals is clearly tied to the presence of some kind of die fill, the mechanism is obscure. I suspect that the substance has the consistency of a very stiff gel that is firm enough to hold an incuse image of the numeral 5 and then transfer that image to a planchet. I further suspect that the entire process begins as the substance conforms to the recesses of the obverse die, forming a lining for that cavity.
The biggest mystery is how that lining migrates from the die’s recess and onto the adjacent field. There’s no line of separation between the extra 5 and the rest of the struck-through surface. It may be that, during the strike, the gel stores a lot of potential energy while under compression. When the hammer die retracts, the potential energy is released through expansion of the gel in all directions. Radial expansion of the die’s coating may push the lining of the die recess out of its cavity. However it occurs, once the stiff lining has moved onto the field, it is struck into the planchet, leaving behind a digit of very low relief. The impact of the strike presumably flattens the mold so that the impression it leaves on the coin is slightly enlarged.