Method of deceptive alteration of coins making a come-back 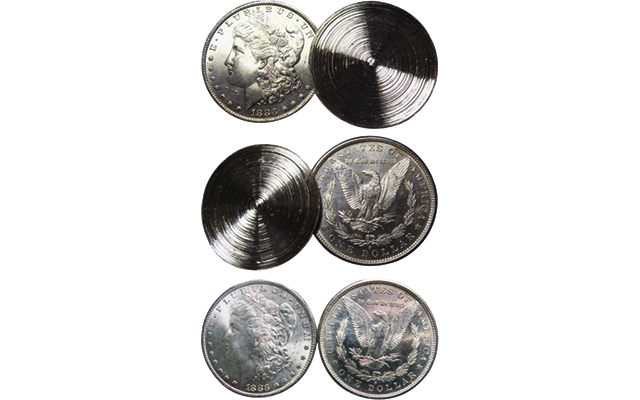 The alteration shown here was likely made by using the obverse from a Philadelphia Mint-struck 1883 Morgan dollar and the reverse from an 1882-S dollar from the San Francisco Mint.

A deceptive alteration method that originally appeared several years ago appears to be making a comeback.

With this method, two common-date Morgan silver dollars would be selected, one for the obverse and one for the reverse.

One side of each coin would be tooled off, using a fine-detail lathe or similar equipment.

The two halves would then be paired and sealed inside a counterfeit grading service holder, usually a high-quality fake of an ANACS, Numismatic Guaranty Corp. or Professional Coin Grading Service holder.

Care was taken to select two coins that would closely match the grade on the fake holder label, often appearing to be “high end” for the listed grade.

The two halves would fit together well, and the plastic seal of the fake holder would be tight enough to prevent any tell-tale rattle.

Older versions of holders were used by the alteration experts, the kind with gaskets that did not allow a clear view of the edge of the enclosed coin.

The result is an 1883-S Morgan dollar alteration that was sealed in a fake Mint State 64 holder.

Even dates like the 1887-S or 1899-S Morgan dollars might be targeted, as long as a common issue is available for the obverse.

Some of these dates are harder to replicate than others.

For example, the 1893-S Morgan dollar has well-known diagnostics in the letters of LIBERTY.

And the appearance of a Mint State 1901 dollar obverse is quite different from that of a 1901-O dollar.

However, these split coin alterations have deceived experts in the past, so please be careful.