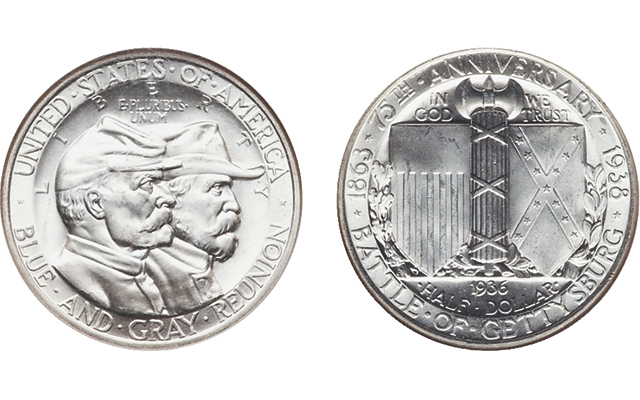 The 1936 Battle of Gettysburg Anniversary half-dollar is among the commemorative coins that honor the Civil War and those who fought in it.

In honor of the upcoming Memorial Day holiday on May 26, Coin World is publishing a series of posts taking readers through coins related to major U.S. wars.

The second post of our Memorial Day series looks at a few coins that commemorate the Civil War, which lasted from 1861 to 1865 and was the bloodiest war in American history.

1936 Battle of Gettysburg Anniversary, 1937 Battle of Antietam Anniversary half dollars: A pair of the most famous battles are among the topics of commemorative coins related to the Civil War.

The 1936 Gettysburg 50-cent piece honors an 1863 battle that is perhaps the most well-known of the Civil War after spawning one of the most famous presidential addresses.

Fought in Adams County, Pa., over the first three days of July 1863, the Battle of Gettysburg resulted in 51,000 total casualties, according to the Civil War Trust.

In a battle that came after a major Confederate victory in the Battle of Chancellorsville, Va., in May, the Union army, under the command of George G. Meade, won at Gettysburg after holding off Pickett’s Charge on July 3. The Confederate army was led at Gettysburg by Robert E. Lee.

Four months after the battle, President Abraham Lincoln delivered the Gettysburg Address, a speech that famously defined the war and its importance to the survival of the United States.

The commemorative half dollar’s obverse features portraits of a Union solider and a Confederate soldier. The reverse contains two shields representing the two armies, separated by a double-bladed fasces.

PCGS CoinFacts estimates that 23,000 of the 26,928 Battle of Gettysburg half dollars have survived. Approximately 7,900 are graded Mint State 65 or better.

The Antietam commemorative coin honored the 75th anniversary of another of the bloodiest battles in the Civil War.

Around 23,000 men were killed, wounded or went missing during the Battle of Antietam, which took place on Sept. 17, 1862, in Washington County, Md.

The battle was a draw militarily, but was a victory in the eyes of Abraham Lincoln and the Union, according to the Civil War Trust, because it drove Confederate troops out of Maryland.

The commemorative coin was designed by William Marks Simpson. It features Gens. George B. McClellan and Robert E. Lee on the obverse, and the strategically important Burnside Bridge on the reverse.

According to PCGS CoinFacts, approximately 15,000 of the 18,028 Battle of Antietam half dollars minted are still around. Of those, about 7,500 are graded MS-65 or better.

The record auction price for a Battle of Antietam half dollar was $26,450 realized by an MS-68 example sold by Heritage Auctions in September 2003.

1922 Grant Memorial half dollar: The 50-cent piece honors the Union army’s top commander on the 100th anniversary of his birth in Ohio.

1995 Civil War Battlefield Preservation half dollar: The coin promotes holding onto our history with the reverse inscription, “ENRICHING OUR FUTURE BY PRESERVING THE PAST."

2009 Abraham Lincoln Bicentennial silver dollar: Two centuries after his birth, the president who went to war to preserve the Union was portrayed on a commemorative coin that featured an excerpt from his famous Gettysburg Address in 1863.

This list, of course, is far from comprehensive. Which Civil War-related coins are we forgetting? Tell us in the comment section below!