ANA voters return incumbents to board 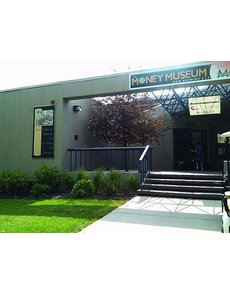 The membership of the American Numismatic Association, which has its headquarters (shown) in Colorado Springs, Colo., has returned six incumbents to the association’s board of governors.

The American Numismatic Association’s membership seems to be generally content with the current direction of the organization, re-electing each of the incumbents to the 2013-2015 ANA Board of Governors.

Of the 20,723 ANA members eligible to vote in the election, 5,542 votes were cast representing 26.75 percent of eligible voters. Results of the election were announced online at the ANA’s YouTube page and on its website, www.money.org.

Ostromecki and Garrett ran unopposed. Ballots for uncontested officers were not tabulated and only the first vote was counted for Garrett and Ostromecki.

Current board members Clifford Mishler and Wendell Wolka did not run for re-election.

New board members will be sworn in on Aug. 16 at the ANA World’s Fair of Money in Rosemont, Ill. Ostromecki will become the association’s 58th president, succeeding Tom Hallenbeck.

According to the ANA’s July 3 press release, the election was the first time that ANA members were given the option to vote by either electronic or paper ballot. Out of 5,542 total votes, 5,037 were cast by paper ballot while another 505 members voted electronically. In total, 5,041 paper ballots were returned, but four of those were invalid ballots.

For comparison, 5,850 ballots were returned in the 2011 election but that election had just one contested position: vice president. The 2009 election saw 8,479 ballots returned of the 29,299 ballots sent, representing a return rate of just under 29 percent. That election saw two candidates running for president, one for vice president and 14 for seven governor seats.

The new blood on the board should shake things up a bit. In a statement posted July 3 on an online message board, Sperber wrote: “Because a new group of people has been elected does not mean old problems should be swept away. I will call for a major investigation of past operations as well as current. In the little due diligence I have uncovered I have found some things (which if true) are horrifying.” She added, “We need to clean things up before we can really move forward. I promise not to be a ‘go with the flow’ voter on issues.” ¦