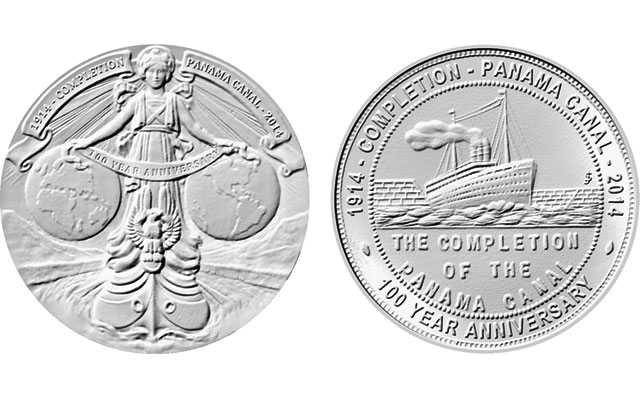 Panama Canal Completion centennial so-called dollar medals are being struck in four metallic versions to mark the centennial anniversary of the completion of the Panama Canal.

To celebrate the 100th anniversary of the completion of the Panama Canal, so-called dollar specialist Jeff Shevlin is partially duplicating commemorative medals that were carried aboard the first vessel to transit the canal a century ago.

To further duplicate the commemoration of a century ago, Shevlin has arranged that the new commemorative centennial medals be carried aboard a cruise ship going through the canal in December.

Commemorative medals ordered from Shevlin up to Nov. 1 will be carried by him aboard a Royal Caribbean cruise ship on a 15-day cruise leaving San Diego on Nov. 30 with eventual passage through the Panama Canal en route to Fort Lauderdale, Fla..

The centennial medal’s obverse nearly replicates the obverse design that appears on the Panama Canal Completion 1914 medal, which is cataloged as Hibler-Kappen 398 in So-Called Dollars by Harold E. Hibler and Charles V. Kappen, revised and edited in a second 2008 edition by Tom Hoffman, Dave Hayes, Jonathan Brecher and John Dean.

The legends and scrolls on the 100th anniversary medals have been modified to read 1914 – COMPLETION PANAMA CANAL – 2014 and 100 YEAR ANNIVERSARY.

The reverse design for the centennial designs is an adaptation with minor modifications of the medal cataloged as HK-432. It is from the 1915 Panama-California Exposition, and features a ship passing through the canal locks.

The Cristobal carried 50,000, 38-millimeter bronze so-called dollar medals, each individually numbered on the reverse, that were struck by John F. Newman Co., in New York.

The method and scope of the distribution of those 50,000 bronze medals following the Cristobal’s passage through the canal is unknown, according to So-Called Dollars. Shevlin said only a few hundred medals from the 50,000 struck in 1914 are known to exist today.

The 2014 centennial medals will all be 39 millimeters in diameter regardless of composition.

The silver medals will be edge-marked incuse ONE TROY OZ .999 SILVER. The gold medals will contain 1.6 ounces of pure gold and be edge marked 50 GRAMS 999+ GOLD.

All planchets will be polished and have raised, upset rims before striking.

The silver version will cost $65 each, the copper medal will be sold for $10 each and the gold-plated version is priced at $35. The 1.6-ounce gold versions will be offered at approximately $2,350, the actual price depending on the spot price of gold per troy ounce at the time of the order

Shevlin said currently six couples taking the cruise have ordered one gold-plated medal per couple. Those six medals will be serial numbered 01 through 06 incuse on the edge.

None of the other medals will be edge numbered.

Shevlin said Oct. 20 that five of the 1.6-ounce gold medals have been ordered, with him being the only one taking the cruise who has ordered a gold version.