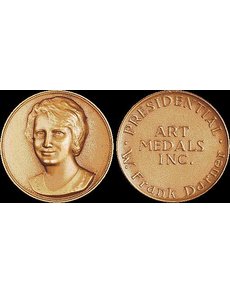 Is the identity of the lady whose Mona Lisa smile graces the obverse of this Ralph J. Menconi medal issued in 1964 by Presidential Art Medals Inc. as elusive today as it was nearly 50 years ago? Or is it a portrait of Annie Darner?

Mysteries are many in the medal field, including thought-provoking pieces of the recent past.

One of these is an enigmatic 32-millimeter bronze medal bearing the portrait of a demure woman of uncertain age wearing a simple smock trimmed in lace.

She has a smile recalling that of the Mona Lisa but is wholly unidentified.

The edge identifies the maker as MEDALLIC ART CO., still located at that time in New York City.

Although the woman’s identity was never publicly disclosed, Harper told this columnist in 1974 that the mystery piece was called the “Lovely Lady Memorial Medal,” and was struck in 1964 in honor of the late Annie Darner, wife of W. Frank Darner. She had died decades earlier, and her grieving husband never remarried.

Some of these medals are found in a brass-trimmed black leatherette case gold-stamped “Memorial Medal” and “Lovely Lady,” with the Presidential Art Medals logo and “Englewood, Ohio,” on the inner lid, but still no name of the person depicted appears.

Too many issues from copy-cat competitors sank the short-lived boom and the bustling arrival of the aggressive and newly formed Franklin Mint doomed Presidential Art Medals.

Another blow was the death of Ralph Menconi in 1972 at the age of 57. This fast-working, quality-seeking sculptor proved hard to replace, although other artists such as Boris Buzan were recruited to complete some of the series.

Presidential Art Medals’ end was accelerated by the costly launch of Art Medals Inc. of Brookfield, Conn., a spin-off from Medallic Art Co. that had a short and stormy existence.

Today, Presidential Art Medals and Darner are virtually forgotten, although listings of their several medal series appear to be bringing encouraging prices when posted for sale on online sites.

The “Lovely Lady” also remains, smiling her bronze smile and is, at least officially, still as mysterious today as she was in 1964.