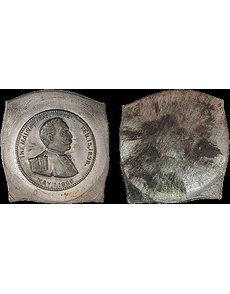 Lead splasher may have been used to test the design for relic medals struck to commemorate the destruction of the USS Maine and George Dewey, hero of the Battle of Manila Bay. The dates mark the ship’s destruction and the battle.

Mike Diamond suggested that I reach out to you on an item that I came across a while ago. It looks like a splasher of an Adm. George Dewey medal of some sort, and up to now I have had it in my error collection. In general it is just a really neat item, but if a cool story were behind it, well — it would make it that much more cool!

The design on the reader’s splasher (a uniface trial strike) was used for small medals commemorating both the USS Maine and George Dewey.

The Maine was an American battleship destroyed by an explosion while at anchor in Havana Harbor in Spanish-occupied Cuba in 1898. The Spanish-American War was declared following the Maine’s sinking (though popularly blamed on Spain in 1898, the explosion’s cause remains unidentified). Dewey commanded the American squadron that defeated an outgunned Spanish naval force in the war’s Battle of Manila Bay.

Numerous numismatic souvenirs arose from the war, many of them featuring the Maine and many others depicting Dewey.

Medals bearing the same design as the reader’s splasher were composed of metal recovered from the Maine — making those pieces “relic” items.

The relic medals were introduced Feb. 15, 1899, a year to the day after the sinking of the Maine.

They were struck by W.F. Doll Manufacturing Co., New York City. The company obtained about 1,200 pounds of metal from the New York Navy Yard. The medals were accompanied by a handbill attesting to their authenticity as genuine USS Maine relic souvenirs. The medals were sold in several forms: attached to a straight pin, to an eagle-shaped hanger and to a butterfly-style U.S. flag ribbon. The firm also made watch cases, souvenir charms, pins, buttons and other souvenirs from metal recovered from the Maine.

These relic medals are simple disks of metal, into which the image of Dewey and sparse inscriptions were impressed. The obverse features the raised image, with the reverse being a rough, incused, mirror image of the obverse. However, many pieces have a backing plate to hide the incused image. The design was engraved by C. Kunze.

The composition of Heinent’s piece, more than 92 percent lead, suggests that it is not a “relic” piece, since the relic pieces are made of steel. Splashers are often struck on soft metallic compositions to test a hub’s or die’s appearance.