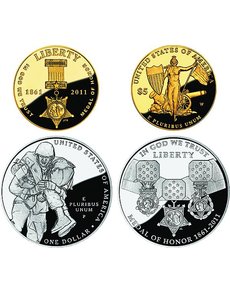 A Proof 2011-W Medal of Honor gold $5 half eagle and Proof 2011-P Medal of Honor silver dollar will be presented Sept. 19 to Congress. Accepting will be U.S. Sen. Daniel K. Inouye, D-Hawaii, a World War II recipient of the medal.

Sen. Daniel K. Inouye, D-Hawaii, a World War II recipient of the Medal of Honor, will accept on Sept. 19 on behalf of Congress a two-coin set of 2011 Medal of Honor commemorative coins that will subsequently go on permanent display at the U.S. Capitol Visitor Center.

Other confirmed participants as of Sept. 8 were Medal of Honor recipients Alfred V. Rascon, from Laurel, Md., and Brian M. Thacker, from Wheaton, Md.

Inouye received his Medal of Honor by distinguishing himself in action as an Army second lieutenant on April 21, 1945, in the vicinity of San Terenzo, Italy.

“Although wounded by a sniper’s bullet, he continued to engage other hostile positions at close range until an exploding grenade shattered his right arm,” according to the citation recognizing Inouye. “Despite the intense pain, he refused evacuation and continued to direct his platoon until enemy resistance was broken and his men were again deployed in defensive positions.”

Rascon, a specialist fourth class in the U.S. Army, was recognized with the Medal of Honor for a series of extraordinarily courageous acts on March 16, 1966, while assigned as a medic during the Vietnam War (www.cmohs.org/recipient-detail/3397/rascon-alfred-v.php).

Thacker, an Army second lieutenant, was cited for conspicuous gallantry in Kontum Province, Republic of Vietnam, on March 31, 1971 (www.cmohs.org/recipient-detail/3431/thacker-brian-miles.php).

The Congressional Medal of Honor Society was chartered by Congress in 1958 to create a brotherhood among the living recipients, to protect and uphold the dignity of the medal, to promote patriotism and love of country and to inspire American youth to become worthy, dedicated citizens of the country. Society membership consists exclusively of the living Medal of Honor recipients.

Today, the society has fewer than 85 members.

For information about the Proof and Uncirculated 2011 Medal of Honor half eagle and silver dollar commemoratives, or to purchase, visit the U.S. Mint’ website at www.usmint.gov or call the Mint order line at 800-872-6468.