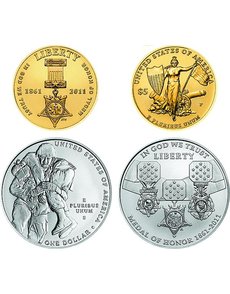 The U.S. Mint is scheduled to begin introductory sales Feb. 25 at noon Eastern Time for the 2011 Medal of Honor gold $5 half eagles and silver dollars.

Introductory discount sales by the United States Mint of Proof and Uncirculated 2011 Medal of Honor gold $5 half eagles and silver dollars were scheduled to begin at noon Eastern Time Feb. 25.

The ordering options, with the introductory price first followed by the regular price, are:

The enabling legislation, the Medal of Honor Commemorative Coin Act of 2009, Public Law 111-91, authorizes the Mint to produce and issue a maximum of 100,000 gold $5 coins and 500,000 silver dollars in recognition and celebration of the establishment of the Medal of Honor in 1861; to honor the American service members who have been recipients of the Medal of Honor; and to promote awareness of how ordinary Americans can challenge fate and change the course of history.

Surcharges from the sale of each coin — $35 for each gold coin and $10 for each silver dollar — are authorized to be paid to the Congressional Medal of Honor Foundation to help finance its educational, scholarship and outreach programs, once the Mint has recouped all production and related costs.

The Proof gold half eagle is being stuck at the West Point Mint and will bear the W Mint mark on the reverse. The gold Uncirculated half eagle will be struck at the Philadelphia Mint and bear the P Mint mark.

The Proof silver dollar is being struck at the Philadelphia Mint with the P Mint mark, with the Uncirculated version produced at the San Francisco Mint with the S Mint mark.

The half eagle obverse, designed and sculptured by U.S. Mint Medallic Sculptor Joseph F. Menna, depicts the original Medal of Honor authorized by Congress in 1861 as the Navy’s highest personal decoration.

The reverse for the half eagle, designed by U.S. Mint Artist Infusion Program Master Designer Joel Iskowitz and sculptured by U.S. Mint Medallic Sculptor Michael Gaudioso, features the goddess Minerva, based on the common central image on the original Army, Navy and Air Force Medals of Honor. Minerva, standing with a shield representing the Army and Navy in her right hand and the Union flag in her left hand, is flanked by a field artillery cannon and wheel of the Civil War era.

U.S. Mint Medallic Sculptor Jim Licaretz designed and sculptured the silver dollar obverse, which features from the viewer’s left to right the three current Army, Navy and Air Force Medals of Honor. The ribbon with field of stars in the center is the common feature of all three medals, reflecting the joint nature of modern era warfare and the fact that the Medal of Honor is the only U.S. military medal worn around the neck.

The reverse, designed by AIP Master Designer Richard Masters and sculptured by Mint Medallic Sculptor Phebe Hemphill, depicts a contemporary Army infantry soldier carrying a wounded soldier to safety under enemy fire, reflecting the courage and self-sacrifice of all Medal of Honor recipients.

All domestic orders will be assessed a $4.95 fee to cover shipping and handling costs. ¦