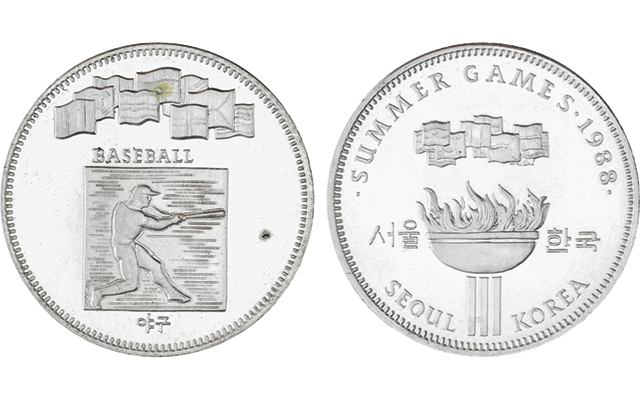 This silver-colored 38-millimeter piece appears to celebrate the inclusion of baseball as a demonstration sport in the 1988 XXIV Olympiad in South Korea. But who produced it and how many were produced remain a mystery.

Can you help me to identify what kind of coin or medal this is?

I found it cleaning out closets at home and don’t remember if someone gave it to me or how I came by it.

Is this something South Korea made for the 1988 Olympics it hosted or was it made in the United States?

And is it worth anything?

One side of this silver-colored medal depicts nine flags, apparently of different nations, above the word BASEBALL, with an image of a batter taking a swing and what looks like Korean text below. The other side states • SUMMER GAMES • 1988 • at the top, and shows 11 more flags of various nations. The same side features a depiction of the Olympic cauldron flanked by Korean text, and at the bottom, SEOUL KOREA.

It is 38 millimeters in diameter, weighs 0.9 ounce, and has a reeded edge.

Baseball was a demonstration sport during the 1988 Olympic Games, the seventh time for the sport. Baseball became an official Olympic sport in 1992 but was dropped from the Olympic roster in 2012.

Unfortunately we could not find any images or information about privately produced Olympic demonstration sport medals, which is what you might have. So we turned to sports and Olympic memorabilia dealer Ingrid O’Neil, in Corona Del Mar, Calif., for some help. She said it is an official commemorative issue.

So was it privately struck and issued in South Korea with limited “circulation.”

So now we ask our readers if anyone can shed some light on the piece pictured here.

Have you seen a medal like it? Do you own one? Do you know who made them? If so, send us an email with information about the medal to the address below.