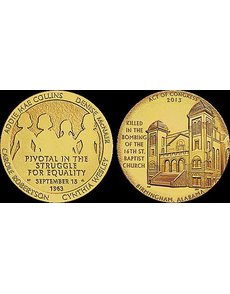 The public may now order U.S. Mint bronze duplicates of the congressional gold medal legislated to recognize the four victims of the 1963 bombing of the 16th Street Baptist Church in Birmingham, Ala. 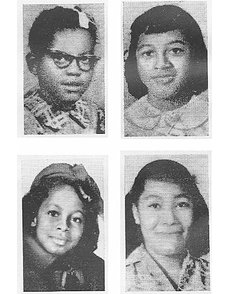 The four victims of the 1963 church bombing in whose memory a congressional gold medal has been issued are, clockwise, from top left, Addie Mae Collins, Cynthia Wesley, Carole Robertson and Denise McNair.
Previous
Next

A congressional gold medal was awarded posthumously Sept. 10 in Washington, D.C., to the four victims of the 1963 bombing by white supremacists of the 16th Street Baptist Church in Birmingham, Ala.

The medal was presented in ceremonies at the United States Capitol on behalf of the four African-American victims — Addie Mae Collins, 14; Denise McNair, 11; Carole Robertson, 14; and Cynthia Wesley, 14.

Presentation of the medal came five days before the 50th anniversary of the Sept. 15, 1963, bombing.

President Obama signed into law May 24, 2013, Public Law 113-11, authorizing recognition of the bombing victims with a congressional gold medal.

The gold medal will be permanently displayed at the Birmingham Civil Rights Institute.

Bronze duplicates of the gold medal are now available from the United States Mint in 3-inch and 1.5-inch versions.

The bombing victims were among 26 children on their way to Sunday worship services at the time of the explosion.

Also in attendance were Chris and Maxine McNair, Denise’s parents and the last surviving parents of the four girls.

“There was no safety for those four little girls. Not even Sunday school,” Reid said. “But there really was salvation. Not only for the four young ladies, but for a nation.

“That outrage sparked by the deaths of these four innocents ignited the civil rights movement like nothing had up to that time.”

Sen. Minority Leader Mitch McConnell, R-Ky., noted in his remarks how the 1963 explosion blew out virtually every stained glass window in the church except one carrying the image of Christ, his face missing, as he led a group of children.

“The symbolism was potent,” McConnell said.

The design features the silhouette of four young girls, representing those killed on that fateful day. The victims’ names are inscribed around the border of the design.

The legend PIVOTAL IN THE STRUGGLE FOR EQUALITY is incused in three lines across the lower portion of the silhouettes, along with the date of the attack, SEPTEMBER 15 1963 in two lines.

The reverse depicts a view of the 16th Street Baptist Church with the inscription KILLED IN THE BOMBING OF THE 16TH ST. BAPTIST CHURCH to the left of the image. Additional inscriptions are ACT OF CONGRESS 2013 and BIRMINGHAM, ALABAMA.

The medals were made available for purchase at the bureau’s online catalog, www.usmint.gov/?catalog, starting at noon Eastern Time on Sept. 11.