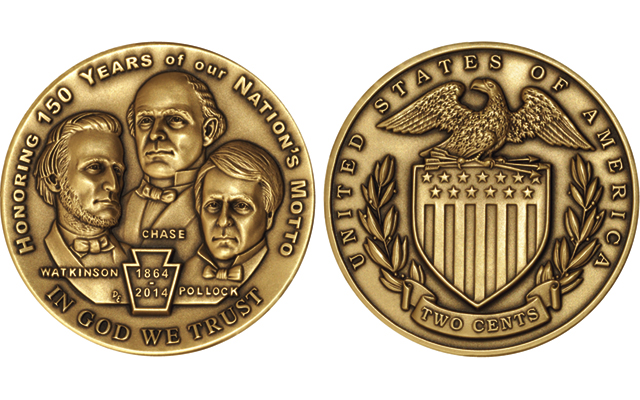 Collectors can now order in three different metallic compositions a 1.75-inch medal honoring the 150th anniversary of the first use of IN GOD WE TRUST on U.S. coinage.

A medal in three metallic compositions is being privately issued in 2014 in conjunction with the 150th anniversary of the use of “In God We Trust” on the nation’s coinage.

The motto first appeared on United States coinage with the 2-cent coin in 1864.

The obverse and reverse designs of the high-relief medal were sculptured by Donald Everhart II, a sculptor-engraver on the engraving staff of the United States Mint in Philadelphia. The medal is a private commission.

According to the U.S. Department of the Treasury website at www.treasury.gov, “The motto IN GOD WE TRUST was placed on United States coins largely because of increased religious sentiment existing during the Civil War.”

Chase received numerous appeals from devout individuals, the first recorded being a Nov. 13, 1861, letter from the Rev. Watkinson, from Ridleyville, Pa.

Several years later, the Mint Act of April 22, 1864, changed the composition of the cent coin and authorized the minting of the 2-cent coin. Pollock was directed to develop the designs for these coins for final approval by the Treasury secretary. During the design of the 2-cent coin, a motto was selected and placed on the adopted design. The motto was placed on other denominations over the years, though it was not until well into the 20th century that all denominations bore the motto.

A law passed by the 84th Congress and approved by President Eisenhower on July 30, 1956, declared “In God We Trust” the national motto of the United States.

Superimposed at the base of the conjoined portraits on the obverse of the medal is a keystone within which appears the anniversary dates 1864 and 2014. Pennsylvania is known as “the Keystone State.”

Inscribed around the top border is HONORING 150 YEARS OF OUR NATION’S MOTTO, with IN GOD WE TRUST along the bottom border.

On the reverse is an eagle atop a shield, with TWO CENTS on a ribbon spanning two laurel branches. UNITED STATES OF AMERICA is inscribed around the top border.

Uram said he received approval from the U.S. Mint for the use of TWO CENTS in the design.

The obverse is based on design elements and preliminary sketch from a collaboration of Thomas Uram — who underwrote the development costs for medal production and is a dedicated collector of 2-cent coins, president of the Pennsylvania Association of Numismatists and member of the Citizens Coinage Advisory Committee — and graphic artist Pamela Forcht.

The reverse reflects Everhart’s original design based on suggestions from Uram and Forcht to use elements from the 2-cent coin design.

Northwest Territorial Mint is striking the 1.75-inch medal in brass with a bronze finish, in copper, and in a 2-ounce .999 fine silver version with 24-karat gold leaf accents.

Mintage for the bronze finish and copper versions will be unlimited. Uram expects the silver version to have a mintage of no more than 500 pieces. Orders will be taken through the end of the year, Uram said.

Uram said March 17 that 25 of the silver medals had already been struck without serial numbers on the edge, but subsequent medals may carry an incuse serial number. There are no plans to edge number the base metal versions, Uram said.

The medals are being offered online through the PAN website; the In God We Trust Museum website; and the Key Enterprises site.