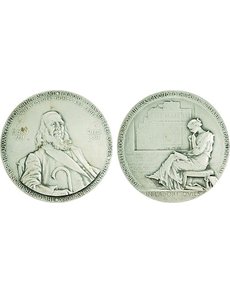 In the late 19th century, American sculptors and medalists flocked to Europe to seek instruction in the art academies of Paris and Rome.

Many of these Americans bonded closely with their mentors, notably Victor David Brenner (born 1871, died 1924).

Beginning his career as a die cutter in New York, Brenner journeyed to Paris in 1898.

Already a master of the ancient method of die cutting in actual size into steel, he studied modeling at the Académie Julian, passing up advanced study at the Ecôle des Beaux-Arts to pursue work and study with Louis Oscar Roty (born 1846, died 1911).

Roty was among the greats in the world of French medallic art.

Brenner is remembered by most collectors today for his creation of the Lincoln cent, though his medallic works were far more numerous. He identified himself so closely with Roty that their work can easily be misattributed. An example is Brenner’s 1911 Motherhood Medal for the Circle of Friends of the Medallion, a veritable twin to Roty’s earlier Maternité medal.

As dramatic is the 68-millimeter 1909 medal hailing the 50th anniversary of Cooper Union in New York City, an institution of free education founded by Peter Cooper (born 1791, died 1883). He was a self-educated inventor and mogul of the iron, steel and railroad industries who built Tom Thumb, America’s first locomotive, and later was famed for his generous support of education.

The low-relief obverse bears a patriarchal seated figure of the aged founder, proudly identified not as a millionaire industrialist, but as PETER COOPER, A MECHANIC OF NEW YORK, with motto, WHATSOEVER THINGS ARE TRUE. The reverse shows the Cooper Union building through the window of a seated muse in deep study. The muse appears in nearly identical form on Brenner’s Motherhood and Cleveland Rowfant Club medals.

The reverse legend hails a LIFE ... DEVOTED TO THE PUBLIC WELFARE, with minute incuse lettering at left stating SARAH AMELIA HEWITT, WITH LOVE AND REVERENCE FOR HER FATHER THE FOUNDER.

Illustrated is a 128.8-gram silver medal, struck along with bronze examples by Tiffany and Co.

Only the closest examination reveals that the designer was not Brenner, but his master, whose O. ROTY signature is hidden beneath the seated muse’s bench.