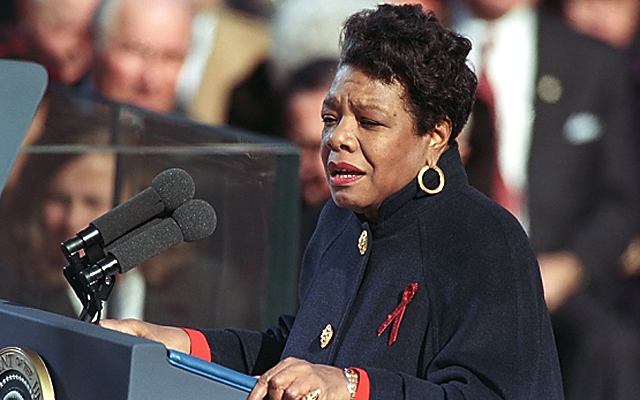 Maya Angelou reciting her poem "On the Pulse of Morning" at the 1993 inauguration of President Bill Clinton.

If approved, the medal would recognize the late Angelou’s many achievements and contributions to American culture and the Civil Rights Movement. She died on May 28, 2014, in her North Carolina home at age 86.

“Maya Angelou was a larger-than-life hero who inspired our nation,” Horsford said. “She was an icon of the Civil Rights Movement, and a champion for women, African-Americans, and all those struggling to find their voice. She represented all that is right about our fundamental American Creed. This award is a fitting honor for such an icon.”

Angelou was born Marguerite Ann Johnson in St. Louis, on April 4, 1928, and raised in Arkansas.

The legislation notes that she was “hailed for her talents as a performing artist at an early age” and she “toured Europe with a production of the Gershwin opera Porgy and Bess in 1955 and released her first album in 1957.”

She also served as a leader of the Southern Christian Leadership Conference during the Civil Rights Movement.

Also noted is that among her achievements she wrote and published “a myriad of literary works enshrining in history her storied life as an icon of the civil rights movement” as well as her autobiography in 1969, I Know Why the Caged Bird Sings, “which catapulted her to international acclaim for its vivid and honest depiction of the experience of black women in the Jim Crow era.” She wrote the screenplay and composed the score for the 1972 film Georgia, Georgia; her script, the first by an African-American woman to be filmed, was nominated for a Pulitzer Prize.

She was honored with the Presidential Medal of Freedom in 2011, the Lincoln Medal in 2008, and the National Medal of Arts in 2000 for her exceptional contributions to American culture as an author and poet. She also received more than 30 honorary degrees and served as the Reynolds Professor of American Studies at Wake Forest University from 1982 to 2014.

She was the first African-American to serve as an inaugural poet, authoring and reciting the poem “On the Pulse of Morning” in 1993.

If the legislation is approved by Congress and signed by the president, the gold medal would be given to the Smithsonian Institution, where it would be available for research. The Smithsonian could make the gold medal available for display, “particularly at the National Museum of African American History and Culture, or for loan as appropriate so that it may be displayed elsewhere, particularly at other appropriate locations associated with the life of Dr. Maya Angelou.”

Bronze duplicate medals would also be authorized to be struck and sold to the public if the legislation is approved.