May circulation production registers a loss 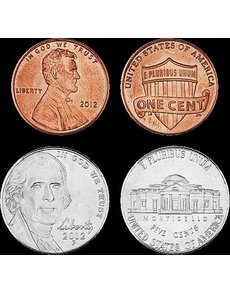 The production of 538.8 million Lincoln cents and 103.92 million Jefferson 5-cent coins in May cost the U.S. Mint $14,019,336 in seigniorage because of production and distribution costs of both coins being more than double their face value.

Circulation coin production in May at the Denver and Philadelphia Mints resulted in negative seigniorage of more than $1.77 million, based on production costs cited in the Mint’s 2011 Annual Report.

Seigniorage is the profit generated by the difference between a coin’s face value and the cost to produce and distribute each coin.

For years, it has cost the U.S. Mint more than face value to produce and distribute Lincoln copper-plated zinc cents and Jefferson copper-nickel 5-cent coins. According to the U.S. Mint’s 2011 Annual Report, it costs the Mint 2.41 cents for each cent, a loss in seigniorage of 1.41 cents per coin, and 11.18 cents for each 5-cent coin, a seigniorage loss of 6.18 cents per coin.

The largest profit in May, $17,689,126, was generated by the output of Presidential dollars. The coins are being struck in circulation quality only for numismatic sales above face value. They are not distributed into circulation by the Federal Reserve.

No Native American dollars or Kennedy half dollars were struck in May. Both coins, like Presidential dollars, are struck in circulation quality only for numismatic sales.

Cumulative circulation-quality coin production figures are posted monthly on the U.S. Mint website at www.usmint.gov. Click on the “About Us” link on the top of the website’s Home Page and then click on the link “Coin Production” on the left side of the second page.

In an effort to reduce production costs for U.S. coinage, the U.S. Mint for the past two years has pursued composition alternatives as called for under provisions of the Coin Modernization, Oversight, and Continuity Act of 2010, Public Law 111-302.

The Mint has until Dec. 14, 2012, to submit to Congress its findings and recommendations for composition changes. ¦