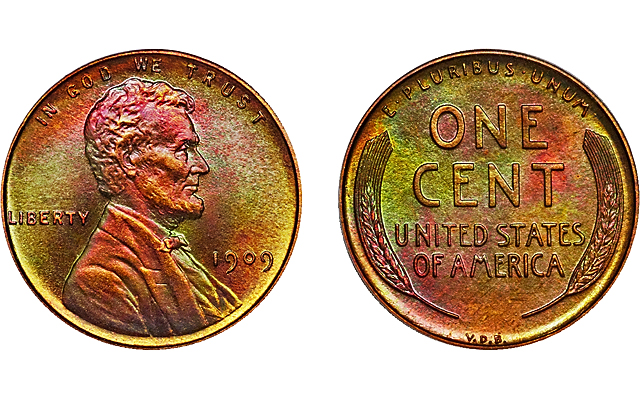 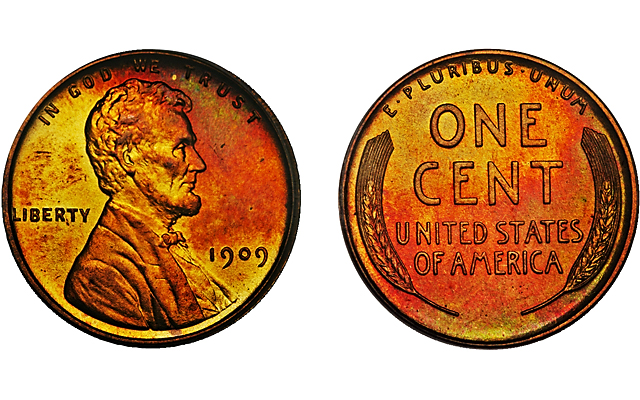 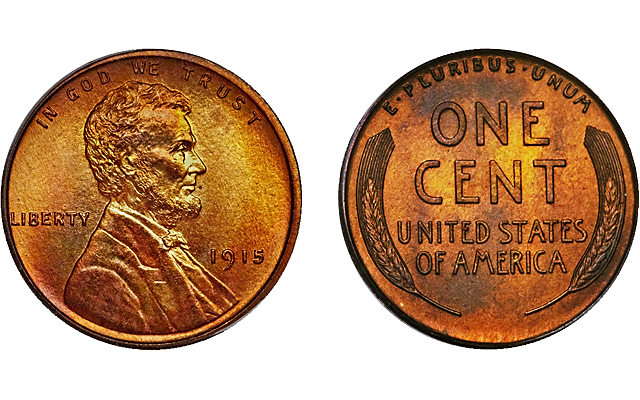 The PCGS Proof 66+ red and brown, 1915 Lincoln can is the second coin in the set to bear CAC’s Gold Label as being undergraded according to CAC standards.

Now, after having his nine-coin Professional Coin Grading Service-graded collection ranked as the top PCGS Registry Set the past four years for Colorless Matte Proof Lincoln Cents (2011, 2012, 2013 and 2014) and having the fifth-highest Lincoln Cents Basic Set, Matte Proof (1909-1916) Registry Set, Watkins is bidding adieu to the coins.

The coins are scheduled to be offered Aug. 7 in Rosemont, Ill., during Heritage Auctions’ Platinum Night session. The auction is being held in conjunction with the American Numismatic Association World’s Fair of Money at the Donald E. Stephens Convention Center.

The McCullagh Collection Matte Proof Lincoln Registry Set, as it is called, is named after Watkins’ wife, Anne Catherine McCullagh.

??1909 Lincoln, V.D.B. cent, Secure Proof 67+ red and brown, stickered by Certified Acceptance Corp., gold label. The rarest issue among the Matte Proof Lincoln cents, with the example to be offered confirmed to have been part of the collection of early 20th century numismatist John Story Jenks from Philadelphia.

Watkins estimates that only between 1 and 2 percent of the more than 100,000-coin population of certified coins graded by PCGS or Numismatic Guaranty Corp. and subsequently stickered by CAC receive the gold label.

According to CAC’s website, a CAC sticker means a “coin has been verified as meeting the standard for strict quality within its grade.”

CAC uses stickers of several colors. Most of the coins submitted to CAC that receive a label receive the green label. The gold label is reserved for coins that are, in the opinion of the CAC experts, undergraded.

A strategic staffing consultant by profession, Watkins, 67, said he began collecting coins while growing up in Albuquerque, N.M.

He says that his best roll find was a key-date 1914-D Lincoln cent in Very Good condition.

Watkins said soon after their release, he bought three 1960 Proof sets containing Lincoln, Small Date cents. He bought the sets for $3 each and was soon offered eight times that amount as the sets rose in popularity.

Watkins said he immersed himself in numismatic literature, focusing on valuations.

Circa 1982 to 1983, Watkins turned his attention to rarities that he could afford. One was a Mint State 63 1916 Indian Head, Doubled Die Obverse 5-cent coin he acquired for $3,000. Nine months later, he more than tripled his purchase price when he sold the coin.

Watkins said that around 2006, he decided to attempt assembling a nine-coin set of Matte Proof Lincoln cents in red, which he quickly learned would be unattainable, since most of the top certified red coins were impounded in specialists’ collections.

Watkins explains that for the “Colorless” category, PCGS assigned a weight value for each issue based on rarity, with bonus points for red and brown coins and red coins.

Without attributing greater value for red and brown or red, Watkins said the McCullagh Collection is still the finest set of all time for Colorless Matte Proof Lincoln Cents.

Once fully assembled, his set was unbeatable in the PCGS Set Registry, Watkins said.

The top coin in the McCullagh Collection is the PCGS Secure Proof 67+ red and brown, 1909 Lincoln, V.D.B. cent, with CAC gold label.

Watkins acquired the coin in a private transaction in March 2010 for $235,000, the highest price anyone has paid for a regular-issue circulation-strike or Proof Flying Eagle, Indian Head or Lincoln cent.

Originally in a Numismatic Guaranty Corp. holder and graded Proof 68?, the coin was crossed over into the PCGS encapsulation, Watkins said.

The coin was pedigreed to Jenks’ collection, whose 1921 sale by numismatist Henry Chapman is considered by many numismatists to be among the most notable numismatic auctions ever held in the United States.

Because the new Lincoln cent designs included fields that could not easily be polished to a traditional Proof finish, the Mint opted for the Matte Proof method employed by France.

The finest examples of the circulation-strike dies that exhibited sharp details were selected, and the dies were then sandblasted. The resultant coins struck from these dies exhibit a granular, pebbly surface.

The Matte Proof dies were used to strike fewer coins than standard circulation-strike dies and the striking pressure was significantly higher on the Matte Proof cents to bring up stronger details, according to Podraza’s website.

The website indicates the Matte Proof coins were shipped from the Philadelphia Mint wrapped in tissue paper that had a high-sulfur content. Podraza’s website suggests original red examples of the Matte Proof Lincoln cents are likely the result of the coins being removed from the tissue paper soon after receipt and then well-preserved since.