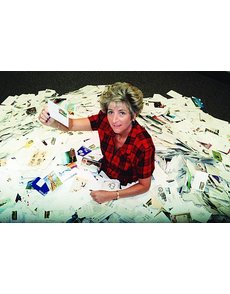 In a photograph published in the Oct. 20, 1997, issue of Coin World, then Publisher Ann Marie Aldrich is shown engulfed by the more than 82,000 post card entries in Coin World’s Botanic Giveaway of three 1997 Botanic Garden Coinage and Currency sets that were later shipped to lucky winners.

Along with the special 5-cent coin, the set included an Uncirculated 1997 Botanic Garden silver dollar and a Crisp Uncirculated $1 Federal Reserve note. The set was priced at $36 and sold out less than a week after being offered at the pre-issue price on Feb. 21, 1997. Ordering limits of five sets per household were imposed

In the months following the sellout, the price for the Coin and Currency set on the secondary market would soar as high as $500, before settling at the $250 level at the end of the year. In a Sept. 15, 1997, Coin World article, dealer Ken Pines stated, “The Botanic set is the single hottest item the Mint has ever issued. It’s been incredibly hot and strong.”

The demand for the sets was very real. Coin World offered a giveaway where readers were invited to send in post cards for a chance to win one of three sets, and the response was overwhelming, with more than 82,000 entries received in Sidney, Ohio. The three winners had submitted one, 60 and 100 post cards each.

At the time of their issue, the Mint made clear that its term “Matte Finish” was not to be confused with the Matte Proof coins used on some U.S. coins in the early 20th century. The modern Matte Finish is the product of planchet and die preparation, rather than a finish created on coins after striking.

The 1997-P 5-cent coins were well-produced, and most receive Specimen or Special Mint Set grades of 69. Individual slabbed Specimen 69 examples routinely sell on online auction venues such as eBay for around $200. The complete sets with original Mint packaging can be found on eBay for around $170.

While sales for the Botanic Gardens sets were hot, the Uncirculated 1997-W Jackie Robinson gold $5 half eagle went unnoticed, creating a legendary modern rarity that will be the focus of next month’s column.