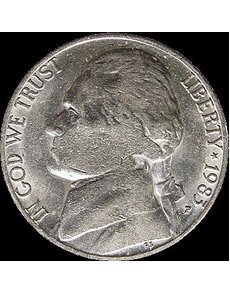 This 1983-P Jefferson 5-cent coin was struck on an abnormally hard planchet. Quite a few similar-looking 5-cent coins are known for this year and Mint, and they were produced by several different die pairs. 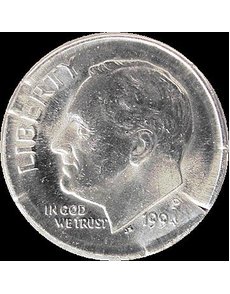 Seven radial splits extend in from the edge on this broadstruck 1994-P Roosevelt dime. As this is a minor broadstrike, it’s unlikely that tensile stresses alone are responsible for the splits. The planchet may have bypassed the annealing oven. 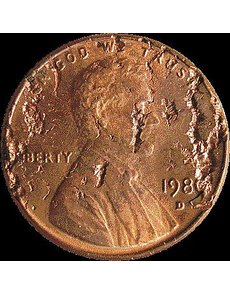 The obverse face of this 1980-D Lincoln cent is crumbling. The reverse face (not shown) is normal in appearance. 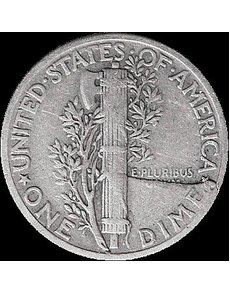 A crack crosses the right side of this Winged Liberty Head dime. The crack appears on both faces. 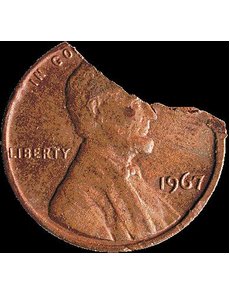 A large piece broke away from this 1967 Lincoln cent after the strike. Other tiny cracks can be seen under a microscope. 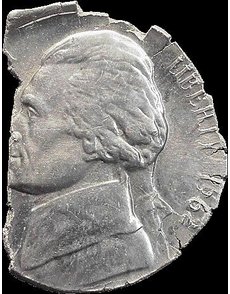 The planchet used for this 1962 Jefferson 5-cent coin shattered when it was struck. On the right side, numerous radial splits extend in from a crumbling edge. The left side of the coin broke off immediately after the strike.

The planchets used for coining must balance hardness and a capacity for plastic deformation.

A planchet that is too hard will not easily conform to the recesses of the die face, leaving parts of the design inadequately defined. This principle is demonstrated in the illustrated 1983-P Jefferson 5-cent coin that was struck on a planchet that was too hard. The center of Jefferson’s face is sunken and featureless, while the center of Monticello (not shown) is also devoid of details.

A planchet that is too soft will wear quickly, rapidly accumulating scratches, dents and other contact marks. This is why small amounts of tin and zinc were added to the copper used for cents from 1864 to 1982. These additional metals made the alloy harder than pure copper.

Hard planchets tend to suffer from the curse of brittleness. A brittle coin can crack, split, crumble or break into pieces. Not all hard materials are brittle, of course. Ordinary glass shatters easily when dropped, but tempered glass is tough (resistant to failure).

By the same token, not all brittle materials are hard. A brittle fortune cookie scratches easily, demonstrating that the baked dough is stiff, but not particularly hard.

Most planchets are heat-softened (annealed) before being introduced into the striking chamber. This allows the metal to flow more easily into the recesses of the die face. It also extends die life.

For other coins, though, if a planchet is inadequately annealed, or skips the annealing oven entirely, it will be abnormally hard and brittle. Brittleness in the absence of increased hardness can be caused by a heavy load of contaminants, trapped gas bubbles or the presence of micro-cracks.

One sign of brittleness is the formation of radial splits when a coin is struck out of collar (broadstruck). The illustrated 1994-P Roosevelt dime displays seven radial splits. As this is a minor broadstrike, it’s unlikely that tensile stresses alone are responsible for the splits. The planchet most likely bypassed the annealing oven.

Another sign of brittleness is a tendency to crumble at the surface or along the edges. The illustrated 1980-D Lincoln cent shows an obverse face that has crumbled in many areas. The reverse face (not shown) shows no evidence of brittle failure. In this case the likely culprit is the presence of contaminants in the alloy.

A brittle coin or planchet can split along the horizontal plane, respectively producing a split-after-strike error and split-before-strike error. Such errors are usually attributed to the presence of contaminants in the alloy.

Brittle coins and planchets can also crack, producing “cracked planchet” errors. The illustrated Winged Liberty Head dime displays a long crack that extends through the right side of the coin. Weakness in adjacent lettering indicates that the planchet crack was present before the strike.

A crack that propagates from one point on the rim to another will produce a broken planchet or broken coin error. The accompanying 1967 Lincoln cent lost a significant portion of its mass after the strike. It would therefore be classified as a broken coin.

Our final illustrated coin combines several forms of brittle failure. This 1962 Jefferson 5-cent coin was struck out of collar. The left side broke away immediately after the strike. On the right side, the edge is crumbling. Numerous radial splits are also visible.