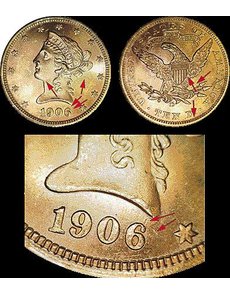 Arrows point to diagnostic areas, outlined in text, to inspect for depressions, raised lines and evidence of tool marks.

Most of the counterfeit U.S. gold coins that we see at ANACS are not difficult to detect. The color and luster of 95 percent of the fakes is different enough from genuine coins that they can be spotted quickly. The fake 1906-D Coronet $10 eagle shown here is one of the exceptions to this rule.

Genuine U.S. gold coins produced during the late 19th and early 20th centuries used a variety of local gold sources, including gold from California and Colorado. Counterfeits struck in the 1960s and 1970s used gold from mines in South Africa, Russia, Australia and China.

Unless the gold is refined to .999 purity, trace elements in gold can give it a distinctive color. Experts can often determine the source of the gold in a coin just by its color, which is often helpful when authenticating coins from the Charlotte and Dahlonega Mints.

The manufacturer of the fake shown here has managed to duplicate the color and luster of a genuine Denver Mint gold coin. It also exhibits sharp details in Liberty’s hair and the eagle’s feathers, and the lettering, stars and date digits are reasonably crisp. Fortunately for us, a number of tiny counterfeit diagnostics can be found with a 7 power loupe and good lighting.

The obverse of the fake shows the following diagnostics:

? Two small depressions above and to the right of the 6 in the date.

? A series of tool marks attempting to repair a depression on the lower jaw/throat area.

? Tool marks attempting to repair a depression on the bridge of the nose.

? A thin raised line from the left point of the sixth star, extending downwards.

? A depression close to the front tip of the coronet.

? A depression above the head, close to the eighth star.

? A circular depression in the field to the right of the lowest hair curl in the bun.

The reverse of the fake shows the following diagnostics:

? Raised lumps inside the shield at the bottom of the furthest right vertical stripe.

? A diagonal depression in the field above the top arrow shaft.

? Tool marks across the dentils below the D in TEN D.

There are other counterfeit markers on this piece, but these are the most easily seen diagnostics.

If you discover that you already have one of these counterfeits in your collection, the only good news I have for you is that the example we saw had the correct amount of gold in it, so even a fake will still be worth approximately $800.