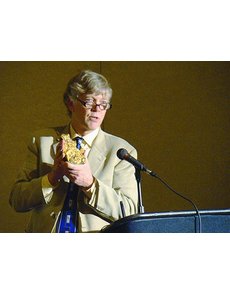 This nearly 100-ounce gold nugget, held by Fred Holabird, realized $460,000 during a March 16 auction. Nicknamed the Washington nugget, it may be the sole remaining authenticated massive gold nugget from the original California Gold Rush region.

What may be the largest California gold nugget in existence sold for $460,000, including the 15 percent buyer’s fee, in a March 16 auction.

The nugget, which weighs approximately 6 pounds and 13 ounces (or more than 8 troy pounds), was sold in the third session of Holabird-Kagin Americana’s Golden West Auction in Sacramento, Calif., to a bidder who wishes to remain anonymous. Spectrum Numismatics International of Irvine, Calif., placed the winning bid on behalf of a client.

The Washington nugget, so named because it was found near the former Gold Rush mining camp of Washington, Calif., was authenticated by geologist Fred Holabird of Holabird-Kagin Americana.

The nugget was variously described as weighing 98+ ounces in the auction catalog and 100 troy ounces in publicity material touting its exhibit in the months leading up to the auction. It was found by a Nevada County, Calif., landowner in February 2010 in an unmined section of the Omega-Malakoff Tertiary Channel.

The auction house has not identified the finder.

The giant nugget was actually one of three nuggets found in the same area “within just a small space,” Holabird wrote in the auction lot listing.

According to Holabird, the nugget “may be the sole remaining authenticated large gold nugget of 100 troy ounce caliber” from the original California Gold Rush region.

The Washington nugget was found using a metal detector. The nugget is from the “blue lead” or bottommost layer of the Tertiary gold channels in California, according to Holabird.

The area had been prospected long ago — the region was the site of mining innovations in the 1850s — and Holabird believes that the site where the Washington nugget was found was covered with mining tailings long ago, without being searched.

In California’s rich gold rush history, there have been larger nuggets of placer gold, but many of the early giants were melted to provide the finder immediate economic benefit.

Placer gold has weathered from the rocks in which it formed and has fallen into place at the bottom of streams and hillsides, carried by gravity and water.

Placer gold should not be confused with gold found inside quartz.

“While 100 [ounce] nuggets are known from Australia and Mexico, I couldn’t think of a single specimen still in existence from California,” Holabird said in the lot listing. “Or at least any that I had seen or known of in museums, including the Smithsonian and the Mariposa Gold Museum.”

Worth more than bullion value

The rarity of giant nuggets means they’re worth much more than their weight in gold; in this case the price realized was about three times the nugget’s bullion value.

“The story surrounding the nugget is important, and underlies the importance of not melting any more of the great nuggets,” Holabird wrote.

Full details about the final results of the auction were unavailable at press time March 18.