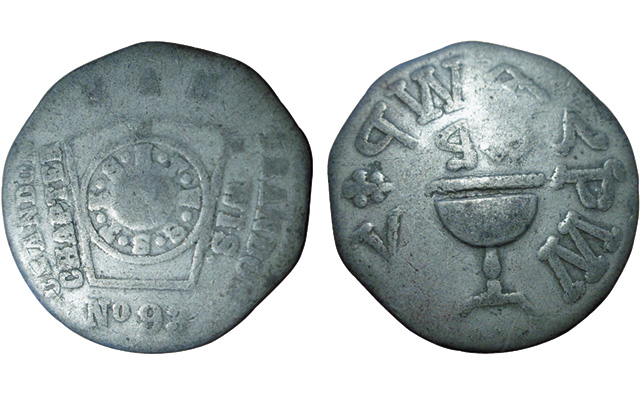 A Masonic "penny" or mark given to members of the fraternal organization is worn but can still be identified as a piece of the fellowship's history.

I’ve had this strange token for several years and am hoping you might be able to shed some light on it for me.

I know it’s a bad photo, but it does show the design. It’s about the size of a quarter, very thin on the edges and silver in color.

It says Crandon on it and that is a town a little north of me here in Wisconsin. Any help would be appreciated.

This piece is a Masonic chapter “penny,” otherwise known as a “mark” of participation received by a member of the Free and Accepted Masons. It is, in the words of the chief cataloger, E.A. King, “a sacred token of the rites of friendship and brotherly love.”

The tradition of the penny mark appears to have arisen in the United States about 1880. King accounted for thousands of varieties, including variations in metal composition, and many bear an inscription ONE PENNY as part of the design.

The reader’s white metal “penny” is cataloged as King 7150, and is from Crandon, Wis., the name still legible on the token despite significant wear.

The token is typical; on one side are chapter identification inscriptions and a keystone, with the letters HTWSSTKS arranged in a circle within the stone. “These letters are supposed to represent the ‘mark’ of our Ancient Grand Master,” King says.

Among biblical references to a mysterious stone he cites Revelation 2:17, “To him that overcometh will I give to eat of the hidden manna, and will give him a white stone, and in the stone a new name written, which no man knoweth saving he that receiveth it.”

The reverse shows a design based on ancient shekel coinage, featuring a chalice and an additional inscription.

Member’s initials or other marks were often added to tokens. Images of the reader’s “penny” appear to show initials above the keystone.

Many Masonic pennies are scarce today because, as King remarked, “members of the fraternity cherish them highly, and do not ordinarily part with them in their lifetime.”