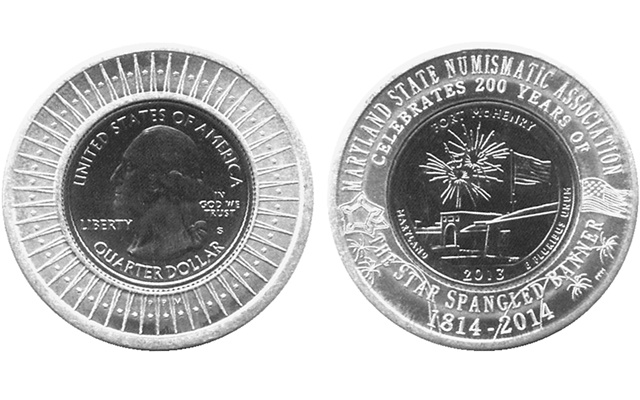 A number of 2013 Fort McHenry quarter dollars are newly encased to celebrate the bicentennial of the War of 1812. The Maryland State Numismatic Association has encased coins from three different Mints, including the San Francisco Mint example here. 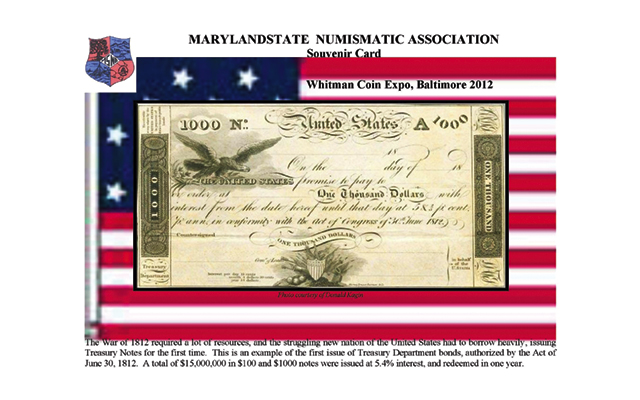 A souvenir card for the War of 1812 Bicentennial features a reproduction of a rare 1812 Treasury Department $1,000 bond superimposed over a 15-star American flag.

The Maryland State Numismatic Association has issued two collector items to commemorate the bicentennial of the “Star-Spangled Banner” and the War of 1812, in which the port city of Baltimore played a significant role.

For the bicentennial of the Battle of Baltimore and the writing of the “Star-Spangled Banner,” MSNA has issued encased 2013 Fort McHenry quarter dollars.

The encased Fort McHenry quarter dollars are from the Philadelphia, Denver and San Francisco Mints.  A set of all three encased coins (one from each Mint) is available for $10.

Individual Philadelphia or Denver Mint quarter dollars are priced at $4 each, and San Francisco Mint quarters are available for $4.50 each.

Also available is the MSNA souvenir card for the War of 1812.

The card is printed in color on thick, glossy paper. Cards are available for $3 each or two for $5.

Postage costs $1 per order, for each product (so an order of both items would require $2 postage).