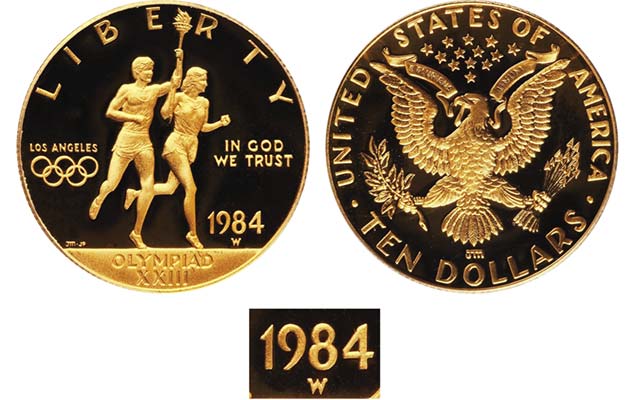 The W Mint mark made its first appearance on the Olympic gold $10 coin honoring the 1984 Los Angeles Olympic Games.

The following is Beth Deisher's From the Memory Bank column from the Sept. 28, 2015, issue of Coin World:

From the perspective of the Los Angeles and U.S. Olympic committees, the commemorative coin program was always about money. Money, that is, to help finance staging the 1984 Los Angeles Olympic Games.

In recognition of the need for funding, the authorizing legislation allowed pre-issue coin sales, with surcharges of $10 for each silver dollar and $50 for each gold $10 coin to be turned over to the Olympic committees. The authorized mintage was 50 million total for 1983 and 1984 silver dollars and 2 million for the 1984 gold $10 coin. Had the total 52 million coins been sold, the Olympic committees could have received $600 million.

Simultaneous to releasing preliminary design concepts for the three coins on Oct. 14, 1982, Treasury officials also announced pricing and details for pre-ordering the coins. They, too, had begun to grapple with how to sell such large numbers of coins.

To create interest, Mint Director Donna Pope announced that a new Mint mark would appear on the gold $10 coin. The Proof version would be struck at West Point and the coin would bear a W Mint mark, even though the West Point facility at the time was a bullion depository, not a Mint.

While coin sales seemed robust initially, by summer 1983 they had begun to plateau.

A total of 5,045,474 Olympic coins were sold; $73.5 million was raised in surcharges — far short of what Olympic planners had penciled into their budget. However, the U.S. Mint had earned $10.3 million in net profit and gained valuable experience in marketing commemorative coins.

Annunzio also had learned. Future legislation would designate which facilities could strike commemorative coins, thereby limiting the number to be sold.