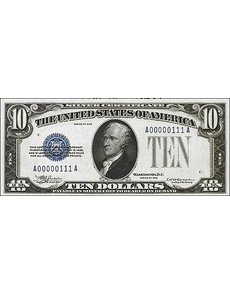 This Series 1933 $10 silver certificate, F-1700, graded Very Choice New 64 PPQ by PCGS Currency, sold for $25,850 in Stack’s Bowers Galleries’ March Baltimore auction. It is one of the rarest small-size silver certificates and features an appealing and previously unknown serial number, A00000111A. The back of the note is not shown.

The sustained but reasonable recovery of the paper money market continues to apply to all areas of the market, not just the bellwether large-size notes.

In fact, only one large-size type note was among the pieces bringing the top six prices in the recent Stack’s Bowers Galleries auction during the Whitman Coin & Collectibles Baltimore Expo, March 14 to 17.

The top large-size note was a Series 1896 $5 silver certificate, Friedberg 268 (Paper Money of the United States by Arthur L. and Ira S. Friedberg), graded Superb Gem New 67 Premium Paper Quality by PCGS Currency, with the added bonus of bearing the low serial number of 56. The note sold for $49,938.

The intricate detail and lavish designs that characterize the Educational Series 1896 $1, $2 and $5 silver certificates render them as much art as money, a role in which they were short lived, soon replaced by the much more conventional looking series of 1899.

An Uncirculated proof of an obsolete note (notes issued before the advent of federal currency in 1862) sold for $29,375. It is one of two known $1,000 Uncirculated proofs for The Bank of North America (Philadelphia), established in 1782 as the first private commercial bank in the United States. The note proof had been unseen since it sold for $2,000 in 1996. ¦