Market readies for a busy fall 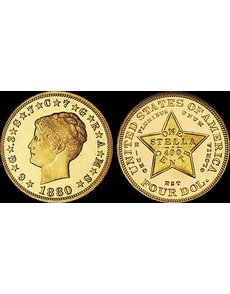 This Proof 67 Cameo 1880 Coiled Hair Stella gold pattern may become the first U.S. gold $4 pattern to cross the $1 million threshold at auction when it’s offered in Los Angeles on Sept. 23, according to Bonhams.

This is proving to be an especially active fall for the rare coin market, with several major auctions that will unleash an unusually rich amount of material in the market.

On Sept. 23, Bonhams will offer a sale titled “The Tacasyl Collection of Magnificent Proof Gold Coins” in Los Angeles. Tacasyl is an acronym formed from initials of the collection’s anonymous consignor and his family.

The collection has just over two dozen rare Proof gold coins, but what it lacks in quantity it certainly makes up for in quality and rarity. Most notable are four $4 Stella gold pattern coins, each graded by Numismatic Guaranty Corp.

The Bonhams catalog notes that “the 1880 Coiled Hair Stella has long been thought of as the ‘great white whale’ of the four coin series.”

The coins are the definition of “fresh to market” having been privately held for seven decades after being purchased from the estate of Colonel E.H.R. Green. The 1,827 Newman lots in the auction have an overall estimated value of more than $15 million.

It’s unusual for such a major collection to enter the market in the fall, so it will be exciting to see how a market that is hungry for rare, quality coins reacts.

These two big market offerings are in addition to the usual busy fall auction calendar, with many auctions by Stack’s Bowers, Heritage and Ira & Larry Goldberg, as well as the year-ending Regency Auction by Legend-Morphy at the Professional Coin Grading Service Members Only Show in Las Vegas on Dec. 19. ¦